Webster Griffin Tarpley is a US historian and researcher. He has published clear explanations of how false flag attacks are used to manipulate the US public.

Webster Tarpley writes for Voltaire Net.[1] For some years he has produced a free weekly podcast entitled World Crisis Radio.[2]

Before Barack Obama was elected, Tarpley clarified that he was a tool of the deep state, and that therefore it was ill advised to expect any real change under his presidency.

Tarpley was a clear advocate of Hillary Clinton in the 2016 US Election, even apparently contradicting his earlier opinions that the choice of US president was only the choice of a figurehead.[3] 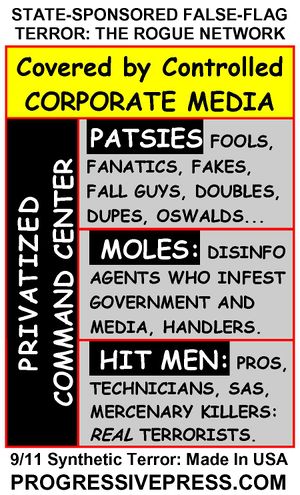 The "rogue network" which Tarpley accuses of the September 11 attacks

Tarpley maintains that the September 11 attacks were engineered by a rogue network of the Military–industrial complex and intelligence agencies as a false flag operation.[4]

In 2010, Christopher Bollyn publishe a piece entitled Beware of Webster Tarpley's Disinformation in which he alleged that "Tarpley lies to protect Israel and the Mossad".[6] He has also been criticised by Kevin Barrett.[7]