Malaysia Airlines Flight 370 was a scheduled flight on 8 March 2014 which apparently disappeared without trace, a quite unbelievable feat with modern technology. The president of Malaysia at that time, Mahathir Mohamad (backed by researchers like Peter Myers), implicated the CIA and plane-builder Boeing were covering up what they actually knew.

Wikipedia reports that Malaysia Airlines Flight 370 (MH370/MAS370)[1], also marketed as China Southern Airlines Flight 748 (CZ748) through a codeshare.[1] was a scheduled international passenger flight that disappeared on Saturday, 8 March 2014, while flying from Kuala Lumpur International Airport, Malaysia to Beijing Capital International Airport, China. Flight 370 reportedly last made voice contact with air traffic control at 01:19 Malaysian Time (17:19 UTC, 7 March) when it was over the South China Sea, less than an hour after takeoff, and the aircraft disappeared from air traffic controllers' radar screens at 01:21 MYT (17:21 UTC).[2][3] Commercially-controlled media reports radar data that showed the plane climbing to around 45,000 feet and then making a rapid dive to 23,000 feet.[4] The official story basically ends on it just crashed somewhere where it will never be found. The combined manpower of three governments, 1046 days of searching, and $160 million failed to pull answers.[5] 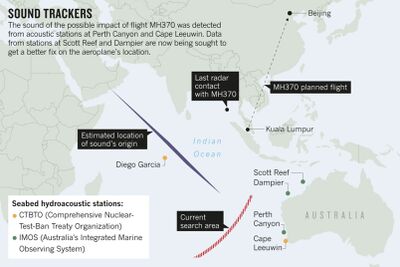 An acoustic signal was picked up at the time of the crash, in a totally different location than the search area

Wikipedia soon relegated discussion of alternative explanations to a second page (just like with TWA flight 800), "Malaysia Airlines Flight 370 unofficial disappearance theories", which as of 2017 gives prominence to Cass "Cognitive Infiltration" Sunstein, CNN and The Independent who tried diverting from any deep political reasoning by asking if it could've been "aliens" (even starting a poll), a black hole, "North Korea" or just battling conspiracy theorists right off the bat.[6]

A mathematics professor from Texas A&M University has argued that the plane must have entered the sea vertically; any other angle of entry would have splintered the air-plane to many pieces, which would have necessarily been found already.[7][8] The Atlantic Monthly itself ran an article in 2014, featuring outside experts saying that Inmarsat's analysis is wrong; and that investigators could be looking in the wrong ocean. This did not stop the international community from still searching there.[9] The official story has some holes, most notably, the first adjustment to the official story was that the plane was revealed to be flying for at least 5 hours after losing contact, which placed question marks at the suicide theories.

James Perloff suggested in 2017 that the aircraft's climb to 45,000 feet may have been a way of killing of the passengers once the cabin was depressurized.[10] Peter Myers, who was actively researching its fate as of February 2017, has suggested that MH370 hijacked by CIA, to stop technology transfer to China.[11]

Emirates CEO Tim Clark said he believed MH370 was hijacked, that the plane may not have flown south, and that government agencies were covering up.[13] Most of the search continued was focused on the original location pin-pointed by governments, near western Australia. Soon, some small pieces were found thousands of miles away from the search area, as one fin or vertical stabilizer found by marines in the western Indian ocean. Although some CEO's like Tim Clark called for new searches after underwater microphones suggested the plane crashed near Madagascar[14], most attention was quickly diverted to another deep event, the downing of another Malaysia Airlines plane, known as MH 17. 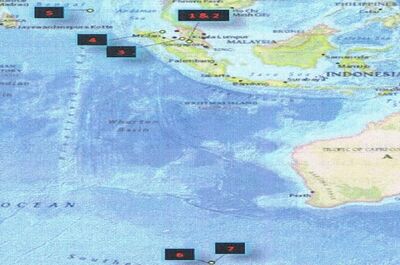 Waypoints of the pilot manually programmed into Microsoft Flight Simulator.

The last radio transmission “Good Night Malaysian Three Seven Zero” was spoken by the crew. However, the pilot did not read back the assigned frequency, which was inconsistent with radiotelephony procedures (which was confirmed by the authorities). The air-plane transponder was disabled one minute later. Upon request, when another plane contacted the plane 10 minutes later, that pilot heard "mumbling and radio static in reply". The captain asked to not [15] be named remarking the following;

"We managed to establish contact with MH370 just after 1.30am and asked them if they have transferred into Vietnamese airspace. The voice on the other side could have been either Captain Zaharie (Ahmad Shah, the pilot) or Fariq (Abdul Hamid, co-pilot), but I was sure it was the co-pilot. There were a lot of interference... static... but I heard mumbling from the other end. That was the last time we heard from them, as we lost the connection. Those on the same frequency at the time would have heard the exchange. This would include vessels on the waters below. If the plane was in trouble, we would have heard the pilot making the Mayday distress call. But I am sure that, like me, no one else up there heard it".

A December 23, 2014 article from the New Zealand Herald and France24 reported that Marc Dugain, the former chief executive of now-defunct Proteus Airlines had a new theory regarding the plane; It was shot down[16]. after being hacked around Diego Garcia. His claims were met with a lot of skepticism. Mahathir Mohamad was visible spooked when discovering - after pushing for questioning how a plane in 2010s could disappear with satellites hovering above the entire world - the media globally refused to investigate or start questioning Boeing (who have a remote autopilot[17]patented but denied to have built into their newest planes) or the CIA (who work with British intelligence agency MI6 at Diego Garcia).[18]

“Clearly Boeing and certain agencies have the capacity to take over ‘uninterruptible control’ of commercial airliners of which MH370 B777 is one. Someone is hiding something, it is not fair that… Malaysia should take the blame. For some reason, the media will not print anything that involves Boeing or the CIA"”
Mahathir Mohamad (2014)  [19]

In a blog post, the Malaysian president doubled down on his claims further remarking “Airplanes can go up and stay up for long periods of time. But even they must come down eventually. They can land safely or they may crash. But airplanes don’t just disappear. Certainly not these days with all the powerful communication systems, radio, and satellite tracking and filmless cameras which operate almost indefinitely and possess huge storage capacities" and that “the ‘uninterruptible’ autopilot would be activated—either by the pilot, by onboard sensors, or even remotely by radio or satellite links by government agencies like the Central Intelligence Agency, if terrorists attempt to gain control of the flight deck".

The final Malaysian report [20] seems to contradict itself, possibly hinting at some form of intervention.

The report concluded the debris found by private citizens and investigations was "consistent with having drifted over nearly two years from the area in which impact is thought to have occurred", failing to mention those like Gibson and Myers have also brought forward witnesses from the islands that have seen a plane not acknowledged by governments.[21] 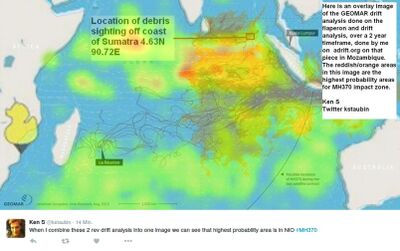 Many strange pieces of evidence have not been followed up on, such as the fact that captain Zaharie Ahmad Shah had proven black site Diego Garcia as one of his simulated destinations in flight training in his Microsoft Flight Simulator (training-sessions he deleted from his hard drive according to the FBI)[22] prepared before flying that night, or the fact that the co-pilot attempted a phone call after the official "disappearance" of the plane[23].

On 30 July 2015, there were reports that a metallic object described as six to nine feet long and three feet wide was found on a beach on the east coast of Reunion, a French island in the Indian Ocean. The object had the code number “BB670” on it. Locals said the object had shells on it and appeared to have been in the water for some time. [24]

Blaine Gibson was reported in May 2018 as stating that he was subjected to stalking, death threats, and even assassination attempts being used to stop his work: "In an interview with The West Australian, Gibson, who is said to have found more than half of the debris that has been discovered of the ill-fated jet, said his own search was subjected to intimidation, stalking, death threats, defamation, and assassination. "For whatever reasons, some people are very upset that I and other private citizens are finding pieces of the plane," he told the newspaper.[25] Gibson traveled to the Maldives and found the citizens that claimed and were willing to claim again that they saw a plane that has not been identified by the Maldives government, and that the government "denies" to the have even existed. One of Gibson's associates was even assassinated[26].

“This report makes no attempt or claim to prove that the large low flying jet plane seen over Kudahuvadhoo that fateful early morning was MH 370. It merely sets the record straight that the jet plane that overflew Kudahuvadhoo has not yet been identified. The Maldives government first claimed there was "no plane", then the plane was a "private jet", then fifteen months later a "domestic propeller plane flight", then back to "no plane", then finally to say it cannot be discussed due to "national security".”
Blaine Gibson (2016)  [27]

Even though several inhabitants of the Maldives confessed[28] seeing a plane with white and blue stripes flying very low on the night of the disappearance towards Diego Garcia, former airlines-boss Marc Dugain[29] was intimated after concluding MH370 shot down near Diego Garcia in the Indian Ocean after it was hacked, being told by a British intelligence agency source, who spoke of "risks" and counseled him to "let time do its work".

The search that did not find anything 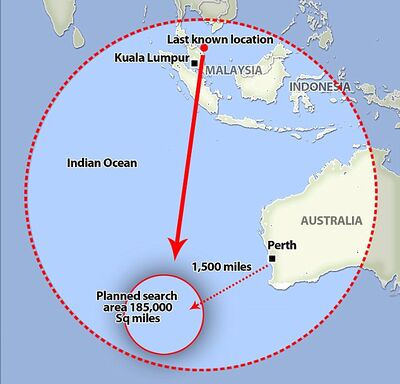 Malaysia and China as well as Australia called off a two-year, $200 million underwater search in the southern Indian Ocean in January 2017 after finding no trace of the aircraft. The Australian-led effort used the most advanced sonar technology available, and presumably had the dual mission of mapping the seabed for mineral resources. A three-month search, led by US exploration firm Ocean Infinity, ended similarly in May 2018.[30]