Cass Sunstein is a US deep state functionary. He has defended the US government's official narrative about the events of September 11, 2001. In 2008, he authored a paper about "Conspiracy theories" which claimed that belief in such theories was linked to violence. He "advocates for the control of society through subversive means of influence (nudging) while allowing people to continue believing that their choices are actually their own."[1]

Sunstein is married to Samantha Power, the 28th United States Ambassador to the United Nations.

“Those who subscribe to conspiracy theories may create serious risks, including risks of violence, and the existence of such theories raises significant challenges for policy and law.”
Cass Sunstein,  Adrian Vermeule (15 January 2008)  [2]

Sunstein co-authored a now infamous 2008 paper, entitled "Conspiracy Theories" which tried to link questioning governments' official narratives with violence, and suggested that "the best response [to "conspiracy theorists"] consists in cognitive infiltration of extremist groups".[3] Various commentators have roundly criticized this intellectual stance.[4][5] who argue that it would violate prohibitions on government propaganda aimed at domestic citizens.[6] Sunstein and Vermeule's proposed infiltrations have also been met by sharply critical scholarly critiques.[7][8][9] The paper was cited in a 2015 speech by François Hollande in which he recommended that governments censor any such questioning from the internet.

In 2014 Sunstein wrote an article Fighting Crime by Going Cashless which suggested that a cashless society could reduce crime.[10]

A Document by Cass Sunstein 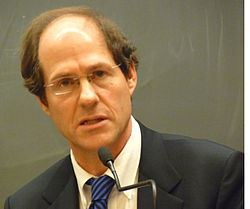 +
Display lifespan
Born 21 September 1954 +
Has almaMater
Harvard University +
Has bilderbergCount
0 +
Has birthPlace
Massachusetts +, Concord +  and U.S. +
Has cercleCount
0 +
Has child
2 +
Has fullPageName
Cass Sunstein +
Has fullPageNamee
Cass_Sunstein +
Has historycommons
http://www.historycommons.org/entity.jsp?entity=cass sunstein 1 +
Has image