Johannes Marten (Joop) den Uijl (commonly known as "Den Uyl") was a Dutch politician who was the powerful leader of the Dutch Labour party (Pvda) from 1966 to 1986 and Dutch Prime Minister from 1973 to 1977. Iconic in Dutch politics, Den Uyl is seen as the face & origin of the "polarized Dutch society[1]" as he became increasingly secretive & repressive while serving with the most "socialist" coalition in Dutch history, setting up the first counterterrorism-units, protecting Prince Bernhard & several more controversial decisions.

In Den Uyl's youth, classmates noted his "sympathy for Adolf Hitler[2]" during the 1930s (this not being mentioned by the English wikipedia page admins), and also his hate for socialism and its "class warfare" and numerous moments of support in lectures for "the awakened German people". According to Den Uyl's biography, his sympathy for the Germans went away after his Jewish girlfriend was deported in the 1940s. After achieving a master in economics from the University of Amsterdam, Den Uyl worked for newspapers Het Parool and Vrij Nederland after the war. From 1949, Den Uyl became the director of the Wiardi Beckman Foundation, the scientific think tank of the PVDA, where he was noted for his skill to feed the peace movement in Dutch society with dozens of articles calling for "freedom".[3] Den Uyl become representative in 1956 as popular writer. After a period as alderman in Amsterdam from 1962 to 1965, Minister of Economical Affairs from 1965 to 1966, Den Uyl became party leader. 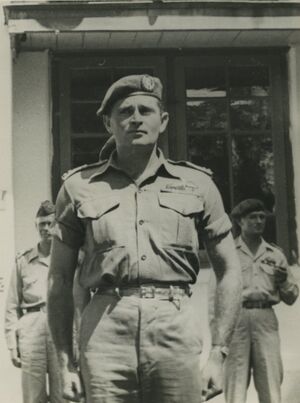 Captain Raymond Westerling - assassinated 400 Indonesians personally and started a coup after the Dutch had ended the civil war and decolonized Indonesia. The CIA attempted a similar coup 10 years later as they had suspicion President Sukarno was leaning towards becoming a "commie[4]". Westerling was named as a planner of a coup to take Prime-Minister Joop den Uyl hostage a decade later as well.

Joop den Uyl presented the Dutch in the international community at the start of the 70s as having an unique "Dutch approach[5] to terrorism"; which translated to very long negotiations with hijackers and "terrorists" instead of military action[6], Den Uyl's session[7] at the Jerusalem International Conference on Terrorism was noted for a call in support of Irish Politician Frank Cluskey; trying to shift European politicians away from the usual enemy image (the Soviet Union) and try to focus on a larger variety of terrorists, in these cases called the IRA[8], Basque independence movements, Libya and the South Moluccans (since the 1950s part of Indonesia), which pointed to calling any independence group not aligned with the government "terrorist or "extremists".[9]

Den Uyl suddenly switched his stance during the attacks on Dutch soil of the South Moluccans train hijackers in 1977, with Den Uyl admitting it being an "execution" 10 years later in a documentary. Den Uyl mentioned the idea to deport 35000 Moluccans from the Netherlands "had failed" while also immediately planning "structural police raids on the Moluccans living in the Netherlands, executing their voluntary defence forces[10]", not opting to maintain his original Dutch Approach plan of continues negotiations with the hostage takers, and joining the other ministers, a controversial decision still being the focus of lawsuits 40 years later as dozens of ex marines and officials are pointing towards either Den Uyl or Van Agt (who never made the razzia statements) for the excessive gunfire used, as communication devices worn by the marines describe assassinating hostage takers that were already severely injured, with the marines seemingly laughing about the shootings directly after them on their communication devices.[11].

Den Uyl never explained why he became a vocal supporter to an "increased" call to "terrorism" by independence movements around the globe in the 1970s after the "terrorist" hijackings and attacks of the South Moluccans, as the approach were seen as extreme but successful as hundred of children in other hijackings were released and a plan to kidnap Juliana was discovered and thwarted. As Dries van Agt, meanwhile, was becoming a increasingly more moral politician, opting for releasing convicted nazis, ending the national illegal drug trade, trying to side with more conservative farmers and land owners regarding federal land policies (in particular the sudden rise of cities, modern projects and the method of taxation of families their own land), with the latter becoming a breaking point for Van Agt's party.[12]

Den Uyl was reported to be unusually frustrated in parliament with van Agt and not himself becoming PM in December of 1977, after avoiding a delay of the Dutch general Election after the train hijacking.[13] The Van Agt-Den Uyl coalition is commonly called the (ultimate) "fighters coalition", with both and dozens of ministers appearing in documentaries until death, very telling being practically the only one in Dutch history[14], with the the 1981 Dutch Cabinet crisis as a result of an alliance trying to "clean house". Den Uyl's shadow cabinet's and government coalition's were full of politicians (not known at that time) clandestinely pursuing other goals, varying from being part of child sex networks to leading Gladio divisions, including individuals such as Ed van Thijn, Max van der Stoel, Henk Vredeling, Laurens Jan Brinkhorst & future PM Ruud Lubbers.

Prince Bernhard received a $1.1 million bribe from Lockheed to ensure the Lockheed F-104 would win out over the Mirage 5 for the purchase contract. The commotion lead to his resignation as Bilderberg Steering committee Chairman and to the only ever cancellation of a Bilderberg meeting.

Dutch Prime Minister Joop den Uyl ordered an inquiry into the affair, while Prince Bernhard refused to answer reporters' questions, stating: "I am above such things".[15] The results of the inquiry led to a constitutional crisis in which Queen Juliana threatened to abdicate if Bernhard was prosecuted. Bernhard was spared, but had to step down from several public positions and was forbidden to wear his military uniforms again, a shock as Den Uyl was reported saying to several cabinet members that wanted to resign immediately that he simply could not jail the husband of the head of state. Minister of Housing, Spatial Planning and the Environment Marcel van Dam was reported as "calling in his resignation immediately", with several following in a night long chaos with nobody daring to publicly announce the report in parliament.

“Of course he belongs in jail, but you can't jail the husband of the head of state. So I have to think of something else.”
Joop Den Uyl (2005)  [16]
Kobben (the source of this quote) was the brother in law of Den Uyl.

Unbeknownst to many[17], after the final report revealing the Lockheed scandal with Prince Bernhard was uncovered to Den Uyl and the Dutch public (becoming a bestseller along the way), the Dutch Commission of Three consisting of Henri Peschar, Marius Holtrop & André Donner included a secret chapter of 12 pages in the version to Den Uyl. The secret pages described Bernhard having orchrestrated[18] a similar deal with US Aerospace manufacturer Northrop Grumman, Den Uyl chose to secretly stash this part away in a secret safe in the International Institute of Social History in Amsterdam for a minimum of 50 years[19], only to be revealed in 2005 by a scholar from the University of Amsterdam, as Queen Juliana threatened to abolish the whole monarchy (with Queen Beatrix refusing to take the throne), and presumably their contacts and influence as well, as several scholars ensured Bernhard was to be convicted if this passage was not hidden.[20]