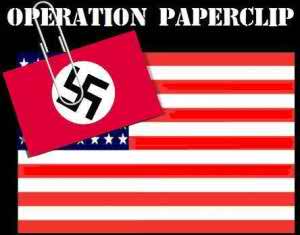 Even before WWII had finished, the US Joint Intelligence Objectives Agency had begun Operation Paperclip, a secret project to exfiltrate personnel of interest out of Germany and into the United States. As well as spooks, these included researchers, especially rocket scientists, but anyone who was of use to the US war machine. The surreptitious protection and transportation of sometimes infamous senior Nazis went on for many years over secret 'ratlines'.

Rather than summary execution of perceived leaders of Nazi Germany, in November 1945, the allies convened the Nuremberg Trials to apply a legal process, which was applied to some leading Nazis. This appears to have acted as some kind of leverage over some of those initially cited for trial at Nuremberg, such as Dr. Theodor Benzinger‎, who were exfiltrated to USA under Operation Paperclip. 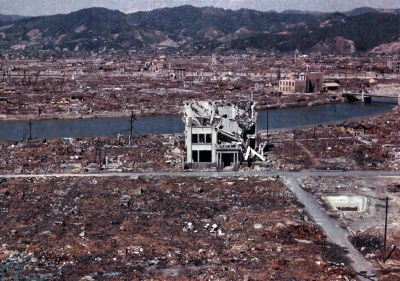 Hiroshima in March 1946, 7 months after the US atomic bombing of the city

The cold war replaced the fear of World War II as the USA and USSR engaged in an arms race to deveop ever more destructive arsenals of WMDs, particularly nuclear weapons.

After the bombings of Hiroshima and Nagasaki, the dramatic destructive power of nuclear weapons was clear to the world (if not the longer term destructive effects of radiation). The USSR quickly determined to acquire their own nuclear capability, as did the USA's wartime allies UK and France.

Starting in 1947, the US Navy's Project CHATTER was the first of a set of attempts at mind control. One part of the projects was about developing ways to force people to disclose secrets, another was about the creation of 'programming' to subject people to another's will, for example, to carry out assassinations. Connections to this project have appeared in subsequent deep events such as the assassination of Robert Kennedy.