Forced sterilization campaigns, also known as compulsory or coerced sterilization, is a government-mandated program to sterilize a specific group of people. Compulsory sterilization removes a person’s capacity to reproduce, usually through surgical procedures, but efforts have also been made more covertly with chemical means by for example "unintentionally" adding a sterilant to drinking water, food sources or vaccines.

Population reduction through sterilization is an issue that has long been close to the heart of the very richest people in the world.[1]

Early population programs of the twentieth century were marked as part of the eugenics movement, with Nazi Germany's programs providing the most well-known examples of sterilization of "inferior" people, paired with encouraging white Germans who fit the "Aryan race" phenotype to rapidly reproduce. The government researched extensively into methods for quick, covert mass sterilizations, including use of radioactivity directed at the gonads.

Rationalizations for compulsory sterilization have included population control, reduction of the number of poor people, gender discrimination, limiting the spread of HIV, ethnic genocide, and on a geopolitical level (Henry Kissinger)[2], to keep global power structures in place. Later, an environmental rationale was added, where a drastic population reduction became an urgent (but often only left strongly implied) part of the campaign to reduce CO2 emissions.

Most Western countries implemented sterilization programs in the early 20th century, but they were officially discontinued by the 1980s. Starting in the late 1960s, these programs were also massively expanded and made more coercive in the Global South, and gained special notoriety during the brutal campaign in India during Indira Gandhi's rule, where people were grabbed off the street and forcibly sterilized under unhygienic conditions. Similar large-scale forced campaigns in South America and Africa have continued unabated..[3]

The United States Agency for International Development is a large driving force in sterilization campaigns. Congress passed the Foreign Assistance Act in 1966, including a provision earmarking funds from the U.S. Agency for International Development (USAID) for population control programs to be implemented abroad. The legislation further directed that all U.S. economic aid to foreign nations be made contingent upon their governments’ willingness to cooperate with State Department desires for the establishment of such initiatives within their own borders. For those Third World rulers willing to help sterilize their poorer subjects, there would be carrots. For the uncooperative types, there would be the stick.[5]

Henry Kissinger, as National Security Advisor and Secretary of State, conducted a secret study on the role of population control measures in the fight against global communism. Kissinger pulled together a group of experts drawn from the National Security Council (NSC), the Central Intelligence Agency, the Department of Defense, the Department of State, USAID, and other agencies to study the question. The result was issued on December 10, 1974 in the form of the classified NSC document titled “Implications of Worldwide Population Growth for U.S. Security and Overseas Interests.” (NSSM 200)[6], declassified in 1989. The memo made the case for a population control effort that is global in scope but not traceable back to its wealthy supporters.

On November 26, 1975, NSSM 200 was formally adopted by the Ford administration. A follow-up memo issued in 1976 by the NSC called for the United States to use control of food supplies to impose population control on a global scale. It further noted the value of using dictatorial power and military force as means to coerce Third World peoples into submission to population control measures, adding: “In some cases, strong direction has involved incentives such as payment to acceptors for sterilization, or disincentives such as giving low priorities in the allocation of housing or schooling to those with larger families. Such direction is the sine qua non of an effective program.”[7]

The programs are to a large degree coercive. As a regular practice, population control programs provide “incentives” and/or “disincentives” to compel “acceptors” into accepting their “assistance.” Among the “incentives” frequently employed is the provision or denial of cash or food aid to starving people or their children. Among the “disincentives” employed are personal harassment, dismissal from employment, destruction of homes, and denial of schooling, public housing, or medical assistance to the recalcitrant.[5]

A frequent practice is the sterilization of women without their knowledge or consent, typically while they are weakened in the aftermath of childbirth.[5]

This is a small country selection of the large-scale coerced sterilizations that have been conducted in almost a hundred Third World countries in the 1960s, for population reduction purposes. For smaller campaigns of forced sterilizations, see eugenics. 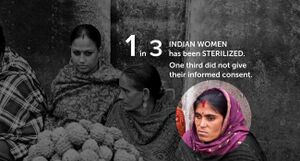 The Emergency in India from 1975 and 1977 resulted from internal and external conflict for the country, and resulted in misuse of power and human rights violations from the government.[8] The state enacted a family planning initiative that began in 1976 in an attempt to lower the exponentially increasing population. This program focused on male citizens and used propaganda and monetary incentives to impoverished citizens to get sterilized.[9] People who agreed to get sterilized would receive land, housing, and money or loans.[10] Millions of men received vasectomies under this program, but a large proportion of these were coerced. There were reports of officials blocking off villages and dragging men to surgical centers for vasectomies.[11] However, after much protest and opposition, the country switched to targeting women through coercion, withholding welfare or ration card benefits, and bribing women with food and money This switch was theorized to be based off the principle women are less likely to protest for their own rights.[11] Many deaths occurred as a result of both the male and the female sterilization programs.[11] These deaths were likely attributed to poor sanitation standards and quality standards in the Indian sterilization camps.

Sanjay Gandhi, son of the then-Prime Minister Indira Gandhi, was largely responsible for what turned out to be a failed program.[8] A strong mistrust against family planning initiatives followed the highly controversial program, the effect of which continues into the 21st century.[12] Sterilization policies are still enforced in India, targeting mostly indigenous and lower class women who are herded into the sterilization camps.[3] Despite these deaths, sterilization is still the highest used method of birth control with 39% of women in India turning to sterilization in 2015.[13]

During the 1970s–80s, the U.S. government sponsored family planning campaigns in Brazil, although sterilization was illegal at the time there.[14] While many women nominally choose this form of contraception, there are many societal factors that impact this decision, such as poor economic circumstances, low rates of employment, and Catholic religious mandates that stipulate sterilization as less harmful than abortion.[15] 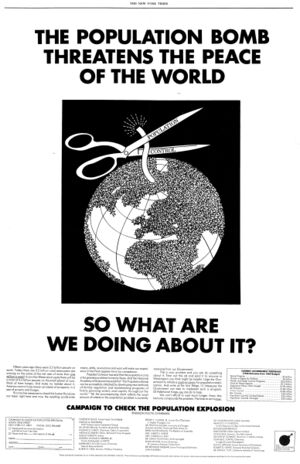 This full-page newspaper ad from a prominent population control group warns that Third World people are a threat to peace, with the image hinting at sterlization.

The time period of 1964–1970 started Colombia's population policy development, including the foundation of PROFAMILIA and through the Ministry of Health the family planning program promoted the use of IUDs, the Pill, and sterilization as the main avenues for contraception. By 2005, Colombia had one of the world's highest contraceptive usage rates at 76.9%, with female sterilization being the highest percentage of use at just over 30% (second highest is the IUD at around 12% and the pill around 10%)[16]. In Colombia during the 1980s, sterilization was the second most "popular" choice of pregnancy prevention (after the Pill), and public healthcare organizations and funders (USAID, AVSC, IPPF) supported sterilization as a way to decrease abortions rates. While not directly forced into sterilization, women of lower socio-economic standing had significantly less options to afford family planning care as sterilizations were subsidized.[14]

In November 2014 a Catholic publication, the Kenya Catholic Doctors Association charged UNICEF and WHO with sterilizing millions of girls and women under cover of an anti-tetanus vaccination program sponsored by the Kenyan government.[17]

The Kenyan government denied there was anything wrong with the vaccine, and said it was perfectly safe. The Kenya Catholic Doctors Association, however, saw evidence to the contrary, and had six different samples of the tetanus vaccine from various locations around Kenya sent to an independent laboratory in South Africa for testing.

The results confirmed their worst fears: all six samples tested positive for the HCG antigen. The HCG antigen is used in anti-fertility vaccines, but was found present in tetanus vaccines targeted to young girls and women of childbearing age. Dr. Ngare, spokesman for the Kenya Catholic Doctors Association, stated in a bulletin released November 4:

This proved right our worst fears; that this WHO campaign is not about eradicating neonatal tetanus but a well-coordinated forceful population control mass sterilization exercise using a proven fertility regulating vaccine. This evidence was presented to the Ministry of Health before the third round of immunization but was ignored.

In Peru, President Alberto Fujimori (in office from 1990 to 2000) committed a genocide and crimes against humanity as a result of the Programa Nacional de Población, a sterilization program put in place by his administration.[18] During his presidency, Fujimori put in place a program of forced sterilizations against indigenous people (mainly the Quechuas and the Aymaras), in the name of a "public health plan", presented on July 28, 1995. The plan was principally financed using funds from USAID (36 million dollars), the Nippon Foundation, and later, the United Nations Population Fund (UNFPA).[19] On September 9, 1995, Fujimori presented a Bill that would revise the "General Law of Population", in order to allow sterilization. Several contraceptive methods were also legalized, all measures that were strongly opposed by the Roman Catholic Church, as well as the Catholic organization Opus Dei. In February 1996, the World Health Organization (WHO) itself congratulated Fujimori on his success in controlling demographic growth.[19]

In the U.S. territory of Puerto Rico, a mass sterilization program was instigated by the Draper Fund/Population Crisis Committee and implemented with federal funds from the Department of Health, Education, and Welfare through the island’s major hospitals as well as a host of smaller clinics. According to the report of a medical fact-finding mission conducted in 1975, the effort was successful in sterilizing close to one-third of Puerto Rican women of child-bearing age.[5]

In the 1977 textbook Ecoscience: Population, Resources, Environment, authors Paul and Anne Ehrlich, and John Holdren discuss a variety of means to address human overpopulation, including the possibility of compulsory sterilization.[20] This book received renewed media attention with the appointment of John Holdren as Assistant to the President for Science and Technology, Director of the White House Office of Science and Technology Policy.[21] Several forms of compulsory sterilization are mentioned, including: the proposal for vasectomies for men with three or more children in India in the 1960s,[22] sterilizing women after the birth of their second or third child, birth control implants as a form of removable, long-term sterilization, a licensing system allotting a certain number of children per woman, economic and quota systems of having a certain number of children, and adding a sterilant to drinking water or food sources (the authors are clear that no such sterilant exists nor is one in development).[23] The authors state that most of these policies are not in practice, have not been tried, and most will likely "remain unacceptable to most societies."[23]