CNN is a US television channel. Donald Trump called it a purveyor of "fake news" before he was elected.[1] Observing its banning in Venezuela for persistent "fake news", 21st Century Wire termed it "Deep State TV network and master of fake news".[2] Nicholas Grossman of Arc Digital charged CNN with "egregious misreading" of a Gallup poll about COVID-19.[3]

CNN covered the first war against Iraq with live reports by Charles Jaco.[4] Some Internet articles accused CNN of faking the whole scene in a studio, which is false.[5] A direct look at the wholly available footage, however, reveals that the insinuated riskiness of their reporting, with sirens in the background that were likely only played for effect, the acting that a gas attack is about to happen, in connection with jokes of air that imply that the situation is not at all dangerous for anyone in the area, is more acting than reality.[6]

Anticipating the collapse of WTC7, CNN announced at 4:10pm on September 11th, 2001 that another building in the WTC complex "has collapsed or is collapsing".[7] Later that evening they reported that a van of explosives had been stopped on the New Jersey Turnpike,[8] a report about the George Washington Bridge Plot which was quickly amended by Bernard Kerik.

Jamie Mcintyre stated “From my close-up inspection, there is no evidence of a plane having crashed anywhere near the Pentagon... The only pieces left that you can see are small enough that you could pick up in your hand. There are no large tail sections, wing sections, a fuselage, nothing like that anywhere around which would indicate that the entire plane crashed into the side of the Pentagon and then caused the side to collapse. Even though if you look at the pictures of the Pentagon you see that the floors have all collapsed, that didn’t happen immediately, it wasn’t until almost about forty-five minutes later that the structure was weakened enough that all of the floors collapsed.”[9]

CNN Published a short report about a large jet white which flew over the White House on September 11th, 2001, believed to have been an E4B. Another report issued in 2007 was removed from the internet and then later replaced.[10] The video is still available on Youtube.[11]

The Sandy Hook elementary school shooting was covered by CNN with live reporting and a "press conference" by one of the parents of a murdered child, Robbie Parker. HD video footage of him walking to the microphone laughing and smiling shortly before the broadcast starts does exist. He then changes in his outer appearance, looking mournful with tears in his eyes right before the broadcast starts, which is the part CNN did air.[12] This among other inconsistencies led to speculation that this school shooting has been a staged false flag attack.

During the 2016 US Presidential Election, CNN was widely interpreted as siding with the Hillary Clinton campaign, and was criticised for engaging in numerous acts of partiality, including asking leading questions to a focus group such as "what was it about Hillary Clinton's argument that resonated with you?" When some of Clinton's emails were leaked on Wikileaks, CNN incorrectly told viewers that it was illegal for their listeners to view the emails, but that CNN could view them because the "media have special privileges."[13]

In 2014 Donald Sterling's former mistress V. Stiviano was in New York to appear in an hour-long interview scheduled with Anderson Cooper. This was pulled without explanation.[14]

CNN has been pretty consistent in denying the existence of the US deep state, and has consistently used quote marks for the phrase when summarising other's speech.[15][16][17] It has depicted it as a (self-evidently) untrue "conspiracy theory" popular with Donald Trump. Julian Zelizer in June 2018 headlined a report Trump uses IG report to spread 'deep state' conspiracy, equating "conspiracy" with "conspiracy theory".[18]

Anderson Cooper according to some polls is one of the most trusted news anchors in the US.[19][20] In some instances he has taken an almost hostile stand against people or their position during the interviews.[21]

Global Research reports on an investigation by the Public Accountability Initiative into the TV appearances of a set of war pundits with known ties to weapons manufacturers which found that out of "37 appearances of the pundits named, CNN attempted to disclose that individual's ties a mere seven times."[22] 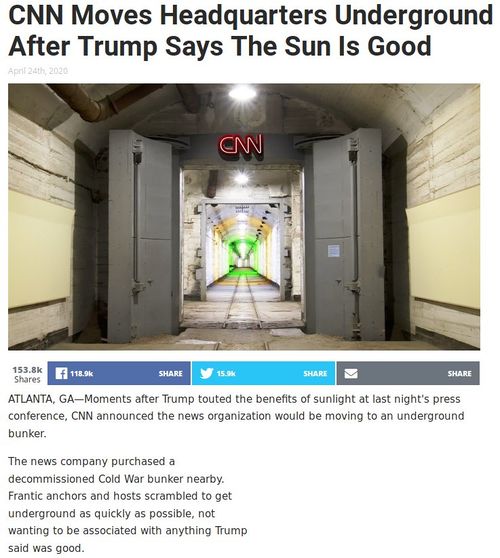 A mockery of CNN's attitude to simply oppose everything that Donald Trump says by the satire site The Babylon Bee.

Project Veritas released a secretly recorded video of an interview with John Bonifield. When asked "why is CNN constantly like Russia this, Russia that?" he replied "Because it's ratings... Our ratings are incredible right now", when asked whether it was bullshit, he replied that it "could be bullshit. I mean, it's mostly bullshit right now. Like we, don't have any big giant proof."[13] Another commentator replied that "the Russia thing is just a big nothing burger".

In October 2019 Project Veritas published recordings made secretly by technician Cary Poarch, who was upset by the covert political bias of CNN.

A Document by CNN