John Hay "Jock" Whitney was U.S. Ambassador to the United Kingdom, officer in the Office of Strategic Services, and president of the Museum of Modern Art. He was a member of the Whitney family. In the 1970s, Whitney was considered one of the ten richest people in the world. 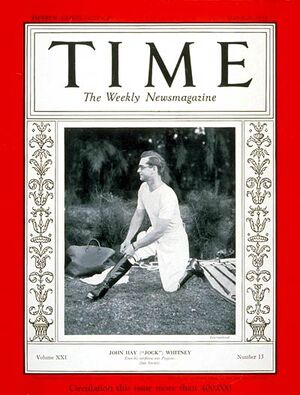 Whitney was born on August 17, 1904, in Ellsworth, Maine, Whitney was a descendant of John Whitney, a Puritan who settled in Massachusetts in 1635, as well as of William Bradford, who came over on the Mayflower. His father was Payne Whitney, and his grandfathers were William C. Whitney and John Hay, both presidential cabinet members. His mother was Helen Hay Whitney.[1]

The Whitneys' family mansion, Payne Whitney House on New York's Fifth Avenue, was around the corner from James B. Duke House, home of the founder of the American Tobacco Co., father of Doris Duke. Whitney's uncle, Oliver Hazard Payne, a business partner of John D. Rockefeller, arranged the funding for Duke to buy out his competitors.

Jock Whitney attended Groton School, then Yale College. He joined Delta Kappa Epsilon fraternity (Phi chapter), as his father had. Whitney, his father, grandfather, and great-uncle were oarsmen at Yale, and his father was captain of the crew in 1898. He was a member of Scroll and Key. After graduating in 1926, Whitney went to Oxford University, but the death of his father necessitated his returning home. He inherited a trust fund of $20 million (approximately $210 million in 2005 dollars), and later inherited four times that amount from his mother.

In 1929, Whitney, despite his vast wealth, was a clerk at the investment bank Lee, Higginson & Co where, through his boss, J.T. Claiborne, Jr., he met former Lee, Higginson clerk Langbourne Meade Williams, Jr., who had come to Claiborne for help in his efforts to gain control of Freeport Texas Co. Williams was a scion of a founding investment firm in the sulfur mining company. In 1929, the year after Whitney became one of the wealthiest men in America, through inheritance, Williams enlisted the help of Whitney's boss, who then enlisted Whitney's financial participation, in his efforts to oust founder and Chairman Eric P. Swenson, casting Whitney in the role of corporate raider before the term existed. Whitney was soon Freeport's biggest shareholder, enabling Williams to replace the chairman and his management team. Claiborne was made a Vice-President; Williams became Freeport's president in 1933, and Whitney was appointed Chairman of the Board.[2][3]

In 1946, Whitney founded J.H. Whitney & Company,[1] the oldest venture capital firm in the U.S.,[4] with Benno C. Schmidt, Sr.—who coined the term "venture capital"—with J. T. Claiborne as a partner. Whitney put up $10 million to finance entrepreneurs with business plans who were unwelcome at banks. Whitney brought in Benno Schmidt as his partner to run it. Companies Whitney invested in included Spencer Chemical and Minute Maid.[1] In 1958, while he was still ambassador to the United Kingdom, his company Whitney Communications Corp. bought the New York Herald Tribune,[5] and was its publisher from 1961 to its closure in 1966.[6] Whitney Communications also owned and operated other newspapers, magazines and broadcasting stations.[7] Whitney's television stations were sold to Dun & Bradstreet in 1969.[8]

Whitney had been investing since the 1930s, founding Pioneer Pictures in 1933 and acquiring a 15% interest in Technicolor Corporation with his cousin Cornelius Vanderbilt Whitney.[9]

Whitney became a highly professional organization, whereas before World War II, venture-capital investments were primarily the domain of wealthy individuals and families. Schmidt, in fact, is credited with coining the term "venture capital", originally known as "development capital". The company was originally described as a lender of "private adventure capital" and Schmidt shortened the term.[10]

Whitney served in the United States Army Air Forces as an intelligence officer during World War II, assigned to the Office of Strategic Services. He was taken prisoner by the Germans in southern France,[11] but escaped when the train transporting him to a POW camp came under Allied fire.[12][13]

In 1930 Whitney was elected to the board of trustees of the Museum of Modern Art in New York City, and named President of the MoMA Film Library in 1935. In 1941 he succeeded Nelson A. Rockefeller as President of MoMA.[14][15] In 1946 he succeeded Stephen C. Clark as Chairman of the Board of Trustees[16]

MoMA played a significant role in the cultural cold war in the decades after World War 2, when it promoted abstract impressionism as a way to get the cultural upper hand.[17]