Ellsworth F. Bunker [1] was an American businessman and diplomat (including being the ambassador to Argentina, Italy, India, Nepal and South Vietnam). He is perhaps best known for being a hawk on the war in Vietnam and Southeast Asia during the 1960s and 1970s. As of February 2021[update], Bunker is one of two people to receive the Presidential Medal of Freedom twice.

Born in Yonkers, New York, he was the eldest of three children of George Raymond Bunker and Jeanie Polhemus (née Cobb), whose family descended from prominent early Dutch settlers including the Evertson family and the Schuyler family. His great-grandmother Eliza Brodhead Polhemus née Heyer was a niece of Stephen Whitney, reputedly the wealthiest American of his time after John Jacob Astor, while her first cousin Charles Suydam was the brother-in-law of Astor's grandson William Backhouse Astor Jr. and his wife Caroline Schermerhorn Astor.[2][3][4] Bunker's father was one of the founders and chairman of the board of National Sugar Refining Company. His younger brother, Arthur Hugh Bunker (July 29, 1895 – May 19, 1964), was also a noted businessman, chairman of the executive committee of the War Production Board (1941–1945) during World War II, and president and then board chairman of American Metal Climax (AMAX).[3][5] His cousin, Dorothy Penrose Cobb, was married to historian Frederick Lewis Allen.

Ellsworth Bunker studied to be a lawyer, and graduated from Yale University with the class of 1916.[2] During World War II he served as chairman of the War Production Board's cane sugar advisory committee.[6]

Ellsworth Bunker with Indonesian President Soekarno at Merdeka Palace during a visit to Jakarta, Indonesia March 1965. 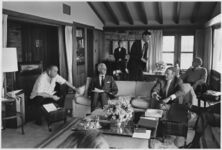 Bunker first worked in his father's company, National Sugar Refining Company,[2] eventually becoming the company's president, succeeding Horace Havemeyer Sr., in 1942. He retired as an active executive in 1951.[7] He remained a member of the board of National Sugar until 1966.[8]

He then moved to government during the Harry S. Truman administration, when Truman appointed him ambassador to Argentina in April 1951.[9] Next he was ambassador to Italy in February 1952.[10] From November 1953 until November 1956 he was president of the American Red Cross.[11][12] In November 1956 he was appointed ambassador to India and Nepal by Dwight D. Eisenhower,[13][14] and sworn in December 1956, where he played a crucial role in the covert alliance between the two powers against China. He was replaced by John Kenneth Galbraith in 1961. During 1962 he acted as U.S. mediator in the New York Agreement over Western New Guinea.

After a period back in Washington, D.C., he was made U.S. ambassador to the Organization of American States, 1964–1966. President Lyndon B. Johnson appointed him U.S. ambassador to South Vietnam, 1967–1973.[15] Once in Saigon, he strongly supported the war efforts of Presidents Johnson and Richard Nixon, and applauded US incursions into Laos and Cambodia.[16] Following the conclusion of the Vietnam War, Bunker headed the US team involved in the drawing up of the 1977 Torrijos-Carter Treaties.

He was awarded the Presidential Medal of Freedom with Distinction twice—the first time by John F. Kennedy in 1963 (though the ceremony took place during Lyndon B Johnson's term) and the second time by Lyndon B. Johnson in 1967. He is one of only two persons (the other being Colin Powell) who received the award twice, and the only person to receive it both times with distinction.

On January 3, 1967 he married fellow ambassador Caroline Clendening "Carol" Laise in Katmandu, Nepal.[21] She died in 1991. Ambassador Laise was a friend of the first Mrs. Bunker.[22]