A flag is a generally rectangular design that is created from cloth and the used as an identity marker, for example during combat. It is also used widely as international competitions such as sporting events.

Flags enjoy differing degrees of legal protection in different jurisdictions. For example, it may be illegal to burn (or fly) a flag. 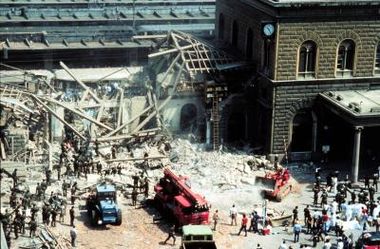 The remains of the Bologna Central Station in August 1980 after a bomb planted by NATO's Operation Gladio killed 85 civilians. It was blamed on communists.[citation needed]

The flying of a false flag is a breach of expected conduct, but has been used to secure an element of surprise. The term has recently moved from the field of military operations to civilian life, after increasing use of commercially-controlled media to misattribute "terrorist" attacks. The modern pattern, a strategy of tension, was developed in Italy during the Years of lead. Deep state groups research and develop enemy images by use of commercially-controlled media. These are then used to promulgate fear through repeated attacks, attributed to third parties.