Malcolm X (born Malcolm Little was an African-American Muslim minister and human rights activist who was a popular figure during the civil rights movement. He is best known for his time spent as a vocal spokesman for the Nation of Islam. He was assassinated in 1965, probably by the FBI.

Malcolm Little was born May 19, 1925, in Omaha, Nebraska, the fourth of seven children of Grenada-born Louise Helen Little (née Norton) and Georgia-born Earl Little.[2] Earl was an outspoken Baptist lay speaker, and he and Louise were admirers of Pan-African activist Marcus Garvey. Earl was a local leader of the Universal Negro Improvement Association (UNIA) and Louise served as secretary and "branch reporter", sending news of local UNIA activities to Negro World. Malcolm X later said that white violence killed four of his father's brothers.[3]

Because of Ku Klux Klan threats, Earl's UNIA activities were said to be "spreading trouble"[4] and the family relocated in 1926 to Milwaukee, and shortly thereafter to Lansing, Michigan.[5] There, the family was frequently harassed by the Black Legion, a white racist grou that burned down their family home in 1929.[6]

When Malcolm was six, his father died in what has been officially ruled a streetcar accident, though his mother Louise believed Earl had been murdered by the Black Legion. Rumors that white racists were responsible for his father's death were widely circulated and were very disturbing to Malcolm X as a child. As an adult, he expressed conflicting beliefs on the question.[7] After a dispute with creditors, Louise received a life insurance benefit of $1,000‍ (about $17,000 in 2020 dollars) in payments of $18 per month;[8] the issuer of another, larger policy refused to pay, claiming her husband Earl had committed suicide.[9]

In 1937, a man Louise had been dating vanished from her life when she became pregnant with his child.[10] In late 1938 she had a nervous breakdown and was committed to Kalamazoo State Psychiatric Hospital. The children were separated and sent to foster homes. Malcolm and his siblings secured her release 24 years later.[11][12]

Malcolm attended West Junior High School in Lansing and then Mason High School in Mason, Michigan, but left high school in 1941, before graduating.[13] He excelled in junior high school but dropped out of high school after a white teacher told him that practicing law, his aspiration at the time, was "no realistic goal for a nigger".[14] Later, Malcolm X recalled feeling that the white world offered no place for a career-oriented black man, regardless of talent.

From age 14 to 21, Malcolm held a variety of jobs while living with his half-sister Ella Little-Collins in Roxbury, a largely African-American neighborhood of Boston.[15][16]

After a short time in Flint, Michigan, he moved to New York City's Harlem neighborhood in 1943, where he found employment on the New Haven Railroad and engaged in drug dealing, gambling, racketeering, robbery, and pimping.[17]

Summoned by the local draft board for military service in World War II, he feigned mental disturbance by rambling and declaring: "I want to be sent down South. Organize them nigger soldiers... steal us some guns, and kill us [some] crackers".[18][19] He was declared "mentally disqualified for military service".

In late 1945, Malcolm returned to Boston, where he and four accomplices committed a series of burglaries targeting wealthy white families.[20] In 1946, he was arrested while picking up a stolen watch he had left at a shop for repairs,[21] and in February began serving an eight-to-ten-year sentence for larceny and breaking and entering.[22]

Between Mr. Muhammad's teachings, my cor­re­spond­ence, my vis­i­tors ... and my reading of books, months passed without my even thinking about being impris­oned. In fact, up to then, I had never been so truly free in my life.[23]

When Malcolm was in prison, he met fellow convict John Bembry,[24] a self-educated man he would later describe as "the first man I had ever seen command total respect ... with words".[25] Under Bembry's influence, Malcolm developed a voracious appetite for reading.[26]

At this time, several of his siblings wrote to him about the Nation of Islam, a relatively new religious movement preaching black self-reliance and, ultimately, the return of the African diaspora to Africa, where they would be free from white American and European domination.[27] He showed scant interest at first, but after his brother Reginald wrote in 1948, "Malcolm, don't eat any more pork and don't smoke any more cigarettes. I'll show you how to get out of prison",[28] he quit smoking and began to refuse pork.[29] After a visit in which Reginald described the group's teachings, including the belief that white people are devils, Malcolm concluded that every relationship he had had with whites had been tainted by dishonesty, injustice, greed, and hatred.[30] Malcolm, whose hostility to religion had earned him the prison nickname "Satan",[31] became receptive to the message of the Nation of Islam.[32]

In late 1948, Malcolm wrote to Elijah Muhammad, the leader of the Nation of Islam. Muhammad advised him to renounce his past, humbly bow in prayer to God, and promise never to engage in destructive behavior again.[33] Though he later recalled the inner struggle he had before bending his knees to pray,[34] Malcolm soon became a member of the Nation of Islam,[33] maintaining a regular correspondence with Muhammad.[35]

In 1950, the FBI opened a file on Malcolm after he wrote a letter from prison to President Truman expressing opposition to the Korean War and declaring himself a communist.[36] That year, he also began signing his name "Malcolm X".[37] Muhammad instructed his followers to leave their family names behind when they joined the Nation of Islam and use "X" instead. When the time was right, after they had proven their sincerity, he said, he would reveal the Muslim's "original name".[38] In his autobiography, Malcolm X explained that the "X" symbolized the true African family name that he could never know. "For me, my 'X' replaced the white slavemaster name of 'Little' which some blue-eyed devil named Little had imposed upon my paternal forebears."[39]

After his parole in August 1952,[40] Malcolm X visited Elijah Muhammad in Chicago.[41] In June 1953 he was named assistant minister of the Nation's Temple Number One in Detroit.[42]Later that year he established Boston's Temple Number 11;[43] in March 1954, he expanded Temple Number 12 in Philadelphia;[44] and two months later he was selected to lead Temple Number 7 in Harlem,[45] where he rapidly expanded its membership.[46]

In 1953, the FBI began surveillance of him, turning its attention from Malcolm X's possible communist associations to his rapid ascent in the Nation of Islam.[47]

During 1955, Malcolm X continued his successful recruitment of members on behalf of the Nation of Islam. He established temples in Springfield, Massachusetts (Number 13); Hartford, Connecticut (Number 14); and Atlanta (Number 15). Hundreds of African Americans were joining the Nation of Islam every month.[48]

Besides his skill as a speaker, Malcolm X had an impressive physical presence. He stood 6 feet 3 inches (1.91 m) tall and weighed about 180 pounds (82 kg).[49] One writer described him as "powerfully built",[50] and another as "mesmerizingly handsome ... and always spotlessly well-groomed".[49]

The American public first became aware of Malcolm X in 1957, after Hinton Johnson,Template:Efn-ua a Nation of Islam member, was beaten by two New York City police officers.[51][52] On April 26, Johnson and two other passersby saw the officers beating an African-American man with nightsticks.[51] When they attempted to intervene, shouting, "You're not in Alabama ... this is New York!"[52] one of the officers turned on Johnson, beating him so severely that he suffered brain contusions and subdural hemorrhaging. All four African-American men were arrested.[51] Alerted by a witness, Malcolm X and a small group of Muslims went to the police station and demanded to see Johnson.[51] Police initially denied that any Muslims were being held, but when the crowd grew to about five hundred, they allowed Malcolm X to speak with Johnson.[53] Afterward, Malcolm X insisted on arranging for an ambulance to take Johnson to Harlem Hospital.[54]

Johnson's injuries were treated and by the time he was returned to the police station, some four thousand people had gathered outside.[53] Inside the station, Malcolm X and an attorney were making bail arrangements for two of the Muslims. Johnson was not bailed, and police said he could not go back to the hospital until his arraignment the following day.[54] Considering the situation to be at an impasse, Malcolm X stepped outside the station house and gave a hand signal to the crowd. Nation members silently left, after which the rest of the crowd also dispersed.[54] One police officer told the New York Amsterdam News: "No one man should have that much power."[54][55] Within a month the New York City Police Department arranged to keep Malcolm X under surveillance; it also made inquiries with authorities in other cities in which he had lived, and prisons in which he had served time.[56] A grand jury declined to indict the officers who beat Johnson. In October, Malcolm X sent an angry telegram to the police commissioner. Soon the police department assigned undercover officers to infiltrate the Nation of Islam.[57]

Malcolm X advocated violent revolution in the US.

“The media's the most powerful entity on earth. They have the power to make the innocent guilty and to make the guilty innocent, and that's power. Because they control the minds of the masses.”
Malcolm X (1963)  [58] 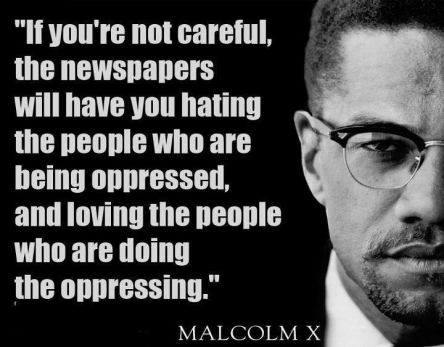 The US Deep state used the FBI to assassinate Malcolm X, according to a deathbed confession letter by Raymond A. Wood penned in 2011 and released in 2021.[59]

A Quote by Malcolm X