Identity politics describes a political approach wherein people of a particular gender, religion, race, social background, sexuality, class or other identifying factors, develop political agendas that are based upon the struggle against systems of oppression that oppress them because of their identities.

The "minorities'" grievances are often genuine, but given that this sectional approach by definition will not include everyone and sets different groups up against each other, it does not pose a challenge to actual power structures. Thus, demands for broad economic and political change is moved into ineffectual channels, where a victory for one "minority" can in fact strengthen the existing structures.

Realizing this, the Powers That Be have given this political approach substantial funding through non-profit foundations and coverage in commercially-controlled media For decades, deep state networks have put substantial efforts into recruiting new leadership cadre from "minorities", through Young Leaders programs and other promotions, at least for the front jobs as politicians. 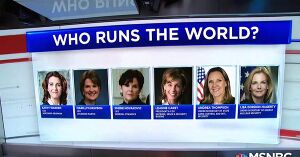 “Seizing upon anything but class, U.S. leftists today have developed an array of identity groups centering around ethnic, gender, cultural, and life-style issues. These groups treat their respective grievances as something apart from class struggle, and have almost nothing to say about the increasingly harsh politico-economic class injustices perpetrated against us all”
Michael Parenti (1997)  [2]

And since identity politics do not challenge power structures, supporting aspects of it is also an easy way for rich and powerful people to appear enlightened, woke and progressive, "the good guys".

Historian Eric Hobsbawm explained its origins: "We have become so used to terms like ‘collective identity’, ‘identity groups, ‘identity politics’, or, for that matter ‘ethnicity’, that it is hard to remember how recently they have surfaced as part of the current vocabulary, or jargon, of political discourse. For instance, if you look at the International Encyclopedia of the Social Sciences, which was published in 1968—that is to say written in the middle 1960s—you will find no entry under identity except one about psychosocial identity, by Erik Erikson, who was concerned chiefly with such things as the so-called ‘identity crisis’ of adolescents who are trying to discover what they are, and a general piece on voters’ identification. And as for ethnicity, in the Oxford English Dictionary of the early 1970s it still occurs only as a rare word indicating ‘heathendom and heathen superstition’ and documented by quotations from the eighteenth century."[3]

"In short, we are dealing with terms and concepts which really come into use only in the 1960s. Their emergence is most easily followed in the USA, partly because it has always been a society unusually interested in monitoring its social and psychological temperature, blood-pressure and other symptoms, and mainly because the most obvious form of identity politics—but not the only one—namely ethnicity, has always been central to American politics since it became a country of mass immigration from all parts of Europe."[3]

“At the end of the 1960s, when I was getting my own political education, the universalizing dimensions of the left, which was growing in the ’60s, fell apart. The women began to feel their issues were not being addressed. They were treated badly by white males, student leaders. Blacks, Panthers, began to feel the whites could not speak for race issues. They developed separate organizations. The upshot was the left lost its universalizing character. It no longer dealt with the intersection of all these issues within the context of a militarized, capitalist, hegemonic American empire. It treated politics as siloed group identity problems. Women had glass ceilings. Same with blacks. Same with gays.”
Charles Derber (2018)  [4]

Developing in the 1960s, with good help from the help of the CIA, Cultural Marxism refers to the shift from the classical Marxist emphasis on the ownership of the means of production (Materialism) to one which solely focuses on oppression through ideas, where wrong use of language (political correctness), identity politics, and promotion of multicultural diversity and the cultural liberal values of the 1960s counterculture are central. Part of the idea is that the more fortunate and well-represented are obligated to represent the 'marginalized' and less well-represented.

Cultural Marxism is a bête noire for the alternative right, which says it is an effort to subvert Western culture, Christian values, and traditionalist conservatism. Wikipedia goes to great lengths to define this as a conspiracy theory.

The I in ITV stands for identity politics

Corporations are committed to appearing woke.