Józef Hieronim Retinger was a Polish deep politician who set up the Bilderberg group and the European League of Economic Cooperation.

At age 18, Retinger went to study in France with the help of Count Zamojski, who paid him to study at the Institut d'études politiques in Paris. With the help of his mentor, he attended many Polish salons, but also French literary cafes, where he met many famous intellectuals and writers. After his thesis, he continued his journey in Europe: Germany, Italy and Great Britain. He also continued his studies at the famous London School of Economics (LSE). He spent a large part of the 1920s in Mexico.

In 1939, Sikorski was the one who formed, in Paris and then in London, the Polish government in exile. At that time. The relations between Sikorski and Retinger got closer, because the Polish exile leader did not speak English. During this period, Retinger debated with heads of other governments such as Marcel-Henri Jaspar, Paul Van Zeeland and Paul-Henri Spaak.

After the disappearance of General Sikorski in an airplane accident (or assassination), Retinger was given the mission by the new Polish Prime Minister Stanisław Mikołajczyk to try to obtain from the leaders of the Polish resistance movement (the AK) a more conciliatory attitude vis-a-vis the Soviet requirements, in order to preserve the independence of Poland after the end of hostilities. The internal dissensions in the Polish government in exile, as well as the intransigent attitude of the AK leaders made this mission a failure. The evacuation of Retinger from Poland and his return to Brindisi on an RAF plane took place in dramatic conditions.

“At the time his Bilderberg project took form the Korean War was ending and US Marshall Plan aid to Europe as well. Józef Hieronim Retinger had spent the war years in London as adviser to the exile government of Prime Minister General Wladyslaw Sikorski. While Retinger’s name was virtually unknown to the world at large, he was one of the most influential string-pullers of the postwar period in Europe and the United States. He was able to get private audiences with the Pope as well as the American President at will. It was he who selected Prince Bernhard to act as figurehead host and who selected which Americans and which Europeans would be invited to Bilderberg.”
William Engdahl (17 December 2016)  [1]

After the war, Retinger was in exile. He decided to contribute to the freedom of his country indirectly. He threw himself into the battle for European integration, convinced that it would one day embrace the countries of the East. He continued his travels to reconnect with the networks he had made when he was in London, through contacts including Paul Van Zeeland and Paul-Henri Spaak.

On September 17, 1946, Retinger spoke with Van Zeeland who presided over the establishment of the Independent League for European Cooperation (ECIL) which became the European League for Economic Cooperation (ECEL). In the minds of its creators, this league was to be a pressure group bringing together the political elites for the construction of a European Union on a liberal basis.

In the early 1947s, pro-European organizations shot up like mushrooms, for example the United Europe Movement with the son-in-law of Winston Churchill at its head, the European Union of Federalists of Hendrik Brugmans, and the Interparliamentary Union of Richard von Coudenhove-Kalergi, or the Christian-Democrat Nouvelles Équipes internationales. Retinger entered into contact with these associations and did not encounter any difficulties (apart from Coudenhove-Kalergi, who jealously wanted to keep his place as a pioneer of a united Europe). Retinger's goal was to coordinate all of these organizations. For this, he organized the congress in The Hague (May 7-10, 1948). This date is a benchmark on the road to European integration.

He is also one of only three European members (along with Winston Churchill and Richard von Coudenhove-Kalergi) on the American Committee on United Europe (ACUE), a front organization created in 1948 by the CIA, the State Department and the Council on Foreign Relations, to coordinate American aid ($$$) for the European unification project. At the time, this was a priority for the United States, and Retinger was responsible for distributing the millions of dollars made available to encourage these goals. Joseph Retinger was also a strong supporter of the creation of NATO in 1949. 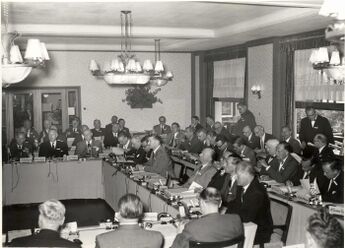 The inaugural Bilderberg meeting, in 1954

Retinger's most significant activity in the area of deep politics was his founding of the Bilderberg group, a deep state milieu which continues to this day. He wrote that he set it up the to offset "a growing distrust of America". He writes that he initially "approached H.R.H. Prince Bernhard, Dr. Paul Rykens and M. Paul van Zeeland with the suggestion that we should organize some unofficial and private meetings... Acting on the advice of my three friends, I approached about a dozen other people, viz: Mr. Hugh Gaitskell, Major-General Sir Colin Gubbins, Mr. Ole Bjørn Kraft, M. Guy Mollet, Dr. Rudolf Mueller, M. Antoine Pinay, M. P. Pipinelis, M. Max Brauer, Marshal of The R.A.F. Lord Portal of Hungerford, Ambassador Quaroni, and Signor de Gasperi".[2]

This page imported content from Wikipedia on 19 February 2020.
Wikipedia is not affiliated with Wikispooks.   Original page source here
Retrieved from "https://wikispooks.com/w/index.php?title=Józef_Retinger&oldid=215963"
Categories: