Chris Bird is a charity worker actively involved with Tendring Citizens Advice Bureau and Tendring Specialist Stroke Services, and in projects supporting health and education in Uganda. Until 2 February 2017, Chris Bird was the Treasurer and acting Secretary of the Clacton Constituency Labour Party. He resigned from the Executive Committee with immediate effect, as did the Chair Sam Atkinson, her 17-year-old daughter Danielle and vice-Chair Dan Casey. No reason was given for their resignations.

Chris Bird was named as the ‘weak’ council candidate who, if the claim is to be believed, "stood in order to lose" at the 2016 St Paul's by-election where UKIP candidate Jack Parsons was elected.[1] Danny Mayzes Conservative came 2nd (311 votes), William Hones Independent 3rd (248 votes) and the Labour Party candidate, Chris Bird, came last with 148 votes.[2] Former Clacton CLP Secretary, Joe Freebody acted as Chris Bird's agent at the by-election.[3]

In November 2016, Parsons defected to Labour without resigning his seat on Tendring District Council.[4] On 1 December 2016, Labour's Eastern Region welcomed Jack Parsons after his defection from UKIP.[5]

On 20 December 2016, closing date for nominations, Chris Bird signed Patrick Haseldine's nomination papers, authorising him to stand as the Labour candidate in the 2017 Frinton by-election.

Sorry you lost in Frinton

I am sorry you lost the election and if I had not have been on holiday, I would have supported you (despite your comments about me some 3 weeks ago).[6]

Just to comment on your Wikispooks posting, I am probably the least likely member of the CLP to support Labour Friends of Israel as I am an active member of the PSC and various other pro Palestinian groups. You may be unaware that as an activist, I spent time in Palestine and worked in the West Bank and the Gaza strip and was shot at by Israeli forces for my efforts both in Rafah and in Khan Yunis. 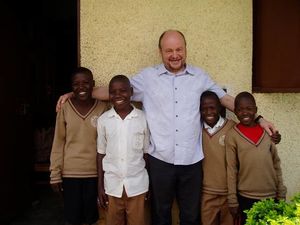 Chris Bird in Uganda in 2012 with children Brenda, Sharif, Rajab, and Emmanuel

On 9 March 2017, the Daily Gazette reported that Chris Bird would be spending three weeks in Uganda starting on 17 April 2017 to support a project to help six girls receive a university education at Livingstone International University and to help a charity, based in Mbale hospital's neonatal unit, boost the survival rate of infants.[7] He said:

"I am putting in a computer system for them. When I was there last year, we wanted to set up bursaries for young local females who couldn't go to university. I saw the vice-chancellor and he said the university was to install a new enterprise resource planning computer system to help it operate better. We did a deal where they would fund two bursaries for the next three years. In return, I would give my time and they would pay my expenses. It works out quite well. We get six girls going to university who wouldn't otherwise have the chance."[8]

He also provides money and other support to a nearby village Kyemula:

"We have built an old people's home and a school. We help with irrigation. Before we were involved, people were dying of hunger. The village has no water, electricity, no gas. Anything you might equate with modern life, it doesn't have."[9]