Tendring District Council (TDC) covers an area extending from the River Stour in the North, to the coast and the River Colne in the South, with the coast to the East and the town of Colchester to the West. Its council is based in the largest town Clacton-on-Sea, with a population of 53,000. Towns in the district include Brightlingsea, Frinton-on-Sea, Harwich and Walton-on-the-Naze. Large villages in the district include St Osyth and Great Bentley.

Sometimes referred to as the "Tendring Peninsula", the district was formed on 1 April 1974 as a merger of the borough of Harwich, with Brightlingsea, Clacton and Frinton and Walton Urban districts and Tendring Rural District. The name Tendring comes from the ancient Tendring Hundred which is named after the small Tendring village at the centre of the area. The Tendring Poor Law Union covered the same area as the present district.

During the English civil war, the witch-finder general, Matthew Hopkins, carried out many trials throughout this and the surrounding area especially in the town of Manningtree and village of Mistley on the River Stour.

Tendring District Council is currently in a state of 'No Overall Control' (NOC) after the local elections in 2015. The Conservatives are the largest party with 23 out of the 60 available seats. The UK Independence Party with 22 seats, the Labour Party with 4 seats, the Holland-on-Sea Residents Association with 3 seats, the Liberal Democrats with 1 seat, Tendring First with 1 seat, and 6 Independents were also elected.[1]

In 2014, the TDC was described as "moronic" and "cretinous" after it destroyed a mural by Banksy on a toilet block in Clacton. A member of the public had complained that the mural was 'racist'.[2]

Tendring's Golf Green ward contains Jaywick, the most deprived area in England and Wales, and is currently held by two UKIP Councillors.[3] 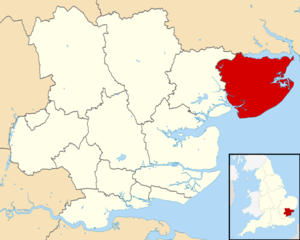