Brown University is a private Ivy League research university in Providence, Rhode Island. Founded in 1764 as the College in the English Colony of Rhode Island and Providence Plantations, it is the seventh-oldest institution of higher education in the United States and one of the nine colonial colleges chartered before the American Revolution.[1] 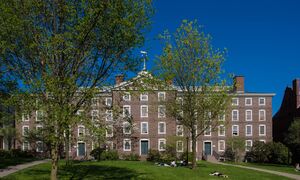 University Hall, Brown's oldest building, was constructed in 1770 and is on the National Register of Historic Places

Admissions is among the most selective in the United States, with an acceptance rate of about 7% for Fall 2019.[2]

The Watson Institute for International and Public Affairs

The Watson Institute for International and Public Affairs is a center for the study of global issues and public affairs and is one of the leading institutes of its type in the country. The institute was initially endowed by Thomas Watson, Jr., Brown class of 1937, former Ambassador to the Soviet Union, and longtime president of IBM. Institute faculty includes, or formerly included, Italian prime minister and European Commission president Romano Prodi,[9] Brazilian president Fernando Henrique Cardoso,[10] Chilean president Ricardo Lagos Escobar,[11] Mexican novelist and statesman Carlos Fuentes,[12] Brazilian statesman and United Nations commission head Paulo Sérgio Pinheiro,[13] Indian foreign minister and ambassador to the United States Nirupama Rao,[14] American diplomat and Dayton Peace Accords author Richard Holbrooke (Brown '62),[15] and Sergei Khrushchev,[16] editor of the papers of his father Nikita Khrushchev, leader of the Soviet Union.