In December 2018, Deadline reported that Sacha Baron Cohen had filmed a Las Vegas concierge who offered to find him an underage boy as a date. His team turned his video footage over to the FBI "because we thought, perhaps there's a pedophile ring in Las Vegas that's operating for these very wealthy men, and this concierge had said that he’d worked for politicians and various billionaires." The FBI were uninterested in pursuing the lead.[1][2] 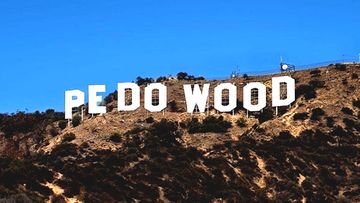 Hollywood has long attracted allegations of paedophilia, just as it attracts juveniles desperate to make a names for themselves as actors and actresses. It is unclear how much of this is organised by the US (or by other) deep states to entrap people, and how much is private enterprise. VIPaedophile has been increasingly exposed in recent years.

A women who was introduced by the name Kendall Jones in an episode of the TV show "Dr Phil" in 2017 explained her lifestory. She was born by her parents to be a slave in a ring that sells children to wealthy, influential people, the establishment of the country. She was a sex slave from the time of her earliest memories and "used to it" by the age of two. Her owner brainwashed her into believing her torture and misery were divinely ordained. She witnessed him murdering some 20 to 25 people and threatened her to keep silent, telling her: "if I told anybody about what was going on, that nobody would believe me".[3][4][5] The host Phil McGraw emphasized that her story had been corroborated:[6]

“I can tell you that a very reliable source has confirmed to us that Kendall has in fact been trafficked, raped, molested, and severely abused by a very large, very dangerous organization”
Phil McGraw (March 21, 2017)  [7]

In the 1980s, Tim Tate produced an expose of the Franklin child prostitution ring, which had direct connections to the US Deep state. Although bought by the networks, it was suddenly pulled from the schedules and never broadcast.[8]

“Autumn is always a time of Fear and Greed and Hoarding for the winter coming on. Debt collectors are active on old people and fleece the weak and helpless. They want to lay in enough cash to weather the known horrors of January and February. There is always a rash of kidnapping and abductions of schoolchildren in the football months. Preteens of both sexes are traditionally seized and grabbed off the streets by gangs of organized perverts who traditionally give them as Christmas gifts to each other to be personal sex slaves and playthings.”
Hunter S. Thompson [9]

Laura Gayler, a Clinton-connected deep state functionary was accused of child trafficking, but only charged (and found guilty of) "arranging irregular travel".