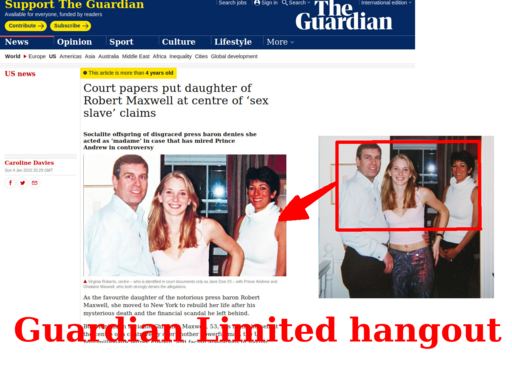 In 2015, The Guardian published a carefully cropped photo of Andrew Windsor, Virginia Roberts and Ghislaine Maxwell

By presenting some true and useful information, a source may gain credibility, which can be put to use later, if a credible source is desired to disseminate disinformation. Another point is that by presenting information, an audience may be desensitized to an otherwise engaging or shocking topic. If more information later emerges, the audience may feel "this is nothing new" (as the commercially-controlled media said about Gary Webb's Dark Alliance, which minutely documented case that the CIA was engaged in the illegal drug business).

The more valuable the information that is "hung out", the more an audience may be disposed to confer credibility on a source. It is easy to see how a subset of information can be chosen that makes it hard to guess the remainder - for example, if it is atypical or otherwise misleading.

Personal factors may dictate which information exposed; for example, a deep politician could arrange a limited hangout of information implicating person or persons deemed to be disloyal. Information selection could be used to send coded messages that only insiders would understand.

A reminder that it is always wise to at least keep open the possibility of a limited hangout is Wikileaks. Julian Assange was quoted in July 2010 as stating that "I'm constantly annoyed that people are distracted by false conspiracies such as 9/11, when all around we provide evidence of real conspiracies, for war or mass financial fraud."[1] It seems unlikely that a man with his experience could miss such an obvious false flag.

In 2009, Wikileaks leaked a huge set of pager messages for the day of 9/11 - which one might suspect would prove interesting, but which in practice has proven to be of relatively little interest. They freely admit that "it's impossible to tell whether the logs have been faithfully reproduced in their entirety".[2] If the set of messages was purged before being posted, then this corresponds to a limited hangout. If false messages were inserted, this makes it a modified limited hangout. Webster Tarpley maintains a high level of suspicion of the commercially-controlled media and has voiced skepticism early about stories they promote. He suggests that examples of Modified limited hangout include:

Described by Edward Snowden as the "biggest leak in the history of data journalism", the Panama Papers was the April 2016 release of over 2½TB of data, apparently created by the Panamanian corporate service provider Mossack Fonseca - detailing >200,000 offshore companies, including the identities of shareholders and directors. This has a highly skewed distribution of people and nations[citation needed] (barely any from the US) suggesting that it might be a partisan limited hangout.

In a March 22, 1973 meeting between Richard Nixon, John Dean, John Ehrlichman, John Mitchell, and H.R. Haldeman, Ehrlichman incorporated the term into a new and related one, "modified limited hangout."[3][4] The phrase was coined in the following exchange:[5]

Before this exchange, the discussion captures Nixon outlining to Dean the content of a report that Dean would create, laying out a misleading view of the role of the White House staff in events surrounding the Watergate coup. In Ehrlichman's words: "And the report says, 'Nobody was involved,'". The document would then be shared with the Senate Watergate Committee investigating the affair. The report would serve the administration's goals by protecting the President, providing documentary support for his false statements should information come to light that contradicted his stated position. Further, the group discusses having information on the report leaked by those on the Committee sympathetic to the President, to put exculpatory information into the public sphere.

The phrase has been cited as a summation of the strategy of mixing partial admissions with misinformation and resistance to further investigation, and is used in political commentary to accuse people or groups of following a Nixon-like strategy.[6]

Writing in the Washington Post, Mary McGrory described a statement by Pope John Paul II regarding sexual abuse by priests as a "modified, limited hangout". 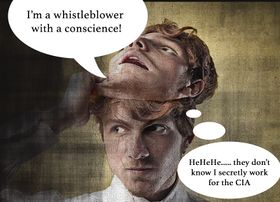 Commentators such as Webster Tarpley have suggested that Edward Snowden may not in fact be the dissident voice that he claims, but in fact be part of a modified limited hangout operation to chill resistance and encourage people to self-censor.[7] As evidence he observes that Snowden's revelations:

John Young and Deborah Natsios of Cryptome, as well as Sibel Edmonds have also shown considerable skepticism about the Snowden affair.[10] [11]

The timing and geopolitical context of genuine leaks can be used to conjecture on the possible purposes of the leaker(s). Even more so, the selection and/or modification of information in limited hangouts. However, this very fact can itself be used to try to misdirect, for example, experts could deliberately carry out inexpert modifications to try to hide their identity.