Mathias Döpfner is Chief Executive Officer of largest media group in Germany and Europe, Axel Springer SE, and a member of the Bilderberg Steering Committee. He is a senior member of several other transatlantic networks.

After being gifted her stake in the business from Friede Springer, elderly widow of media tycoon Axel, Döpfner became a billionaire.[1]

Döpfner once stated: "I am a non-Jewish Zionist",[2] which is entirely in line with the Axel Springer corporate media philosophy, which in writing demands support for the United States and Israel. 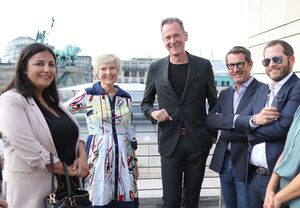 Düzen Tekkal, Friede Springer, Mathias Döpfner, Kai Diekmann and Julian Reichelt on the roof of the US embassy in Berlin (2019)

Döpfner began his career in 1982 as the music critic of the Frankfurter Allgemeine Zeitung supplement. After working as the FAZ correspondent in Brussels, Döpfner moved to Gruner + Jahr in 1992 – initially employed by board member Axel Ganz in Paris, later as assistant to the CEO Gerd Schulte-Hillen.

In March 1998, Döpfner became editor-in-chief of Axel Springer SE's national daily newspaper Die Welt. Under his leadership, the content and visual appearance of the paper was fundamentally revised. On February 26, 2008, Axel Springer announced that the Welt Group had generated a profit for the first time.[3]

Döpfner became a member of the management board of Axel Springer SE and head of the newspaper division in 2000. He became CEO in 2002. A defining characteristic of his leadership continues to be a rigorous focus on digital transformation. Since the start of his tenure as CEO, revenues from digital activities increased from €117m to €2.5bn.

In 2020, Friede Springer designated Döpfner as her successor as she gifted, sold and transferred the right to vote her stake in the business to him. Under the arrangement, she sold a 4.1% stake to Döpfner and gifted 15% more, bringing his direct stake to 22%. She also transferred voting rights her remaining 22% in the business.[4]

Board Positions and Memberships

Since July 2016 Döpfner has been President of the Federal Association of German Newspaper Publishers (BDZV). His mandates in non-profit organizations include membership in the supervisory bodies of the European Publishers Council (EPC), the American Academy in Berlin, the Blavatnik School of Government in Oxford and the American Jewish Committee.

Döpfner was also a member of the board of directors of Ripplewood Holdings (RHJI). In July 2009, independent media made a connection between Döpfner's commitment to the financial investor fighting for car maker Opel and the positive reports on this in some of the Springer Group's media.[8] Döpfner's personal connections to RHJI and the Springer media coverage was not discussed..[9]