Montreux is a municipality and a Swiss town on the shoreline of Lake Geneva at the foot of the Alps. It belongs to the district of Riviera-Pays-d'Enhaut in the canton of Vaud in Switzerland and has a population of approximately 26,433, and about 85,000 in the agglomeration Vevey-Montreux as 2019.

The centre of the region named Riviera, Montreux is an important tourist destination since the 19th century for its mild climate. The region includes numerous Belle Époque palaces and hotels near the shores of Lake Geneva. Montreux railway station is a stop on the Simplon Railway and is a mountain railway hub.

Due to it location in formally neutral Switzerland, pleasant location and large tourist infrastructure, it is a popular place for international conferences. 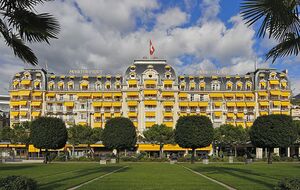 The 2019 Bilderberg conference was held at the a luxury Hotel Montreux Palace. The hotel is part of Fairmont Hotels and Resorts. The Fairmont chain has been part of the AccorHotels group since 2016.

On 20 July 1936, the important Montreux Convention Regarding the Regime of the Straits treaty (a peace pact between Greece, Turkey, England, France and Russia), was signed at the Montreux Palace in the Salle des Fêtes.[1][2] Five hundred diplomats invited by the Turkish Republic arrived at the Palace on 23 June 1936. The pact signed on 20 July at 10pm is recalled by a plaque in one of the salons.[3]

Young ones from rich and prominent families from all over the world are sent to finishing schools in Switzerland. The Riviera School or École Riviera, an international school, is in Montreux.[4]

Other local schools include Surval Montreux (an international all girls boarding school) and St George's School in Switzerland (British international school, in Clarens).