Human fingerprints are easily detectable, nearly unique, marks of identity which are difficult to alter, making them suitable as long-term markers of human identity, although the technique has been somewhat overtaken by new identification techniques such as facial recognition, voiceprints, DNA samples and biometric data.

Authorities are building various databases of people's fingerprints. Some nation states such as Japan have forbidden entry to people unless they give some of all of their fingerprints to the authorities. 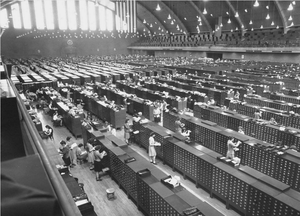 The fingerprint files of FBI, 1944

For its first 75 years of existence, the processing of incoming fingerprint cards by the FBI was predominantly a manual, time consuming, labor intensive process. Fingerprint cards were mailed to the FBI for processing and a paper-based response was mailed back. It would take anywhere from weeks to months to process a fingerprint card.[2]

Computers were first installed to search these files in 1980. Since 1999, the FBI has stored and accessed its fingerprint database via the digital IAFIS (Integrated Automated Fingerprint Identification System) It is a national automated fingerprint identification and criminal history system. IAFIS provides automated fingerprint search capabilities, latent searching capability, electronic image storage, and electronic exchange of fingerprints and responses. IAFIS houses the fingerprints and criminal histories of 70 million subjects in the criminal master file, 31 million civil prints and fingerprints from 73,000 known and suspected terrorists processed by the U.S. or by international law enforcement agencies.[3] US Visit currently holds a repository of the fingerprints of over 50 million non-US citizens, primarily in the form of two-finger records.

Fingerprints collected at a crime scene, or on items of evidence from a crime, have been used in forensic science to identify suspects, victims and other persons who touched a surface. Fingerprint identification emerged as an important system within police agencies in the late 19th century, when it replaced anthropometric measurements as a more reliable method for identifying persons having a prior record, often under a false name, in a criminal record repository.[4] Fingerprinting has served all governments worldwide during the past 100 years or so to provide identification. Fingerprints are the fundamental tool in every police agency for the identification of people with a criminal history.[5]

Fingerprints can theoretically be forged and planted at crime scenes.[8]

In 2004, Brandon Mayfield, an attorney from Oregon, USA, was arrested as a material witness by the FBI because his fingerprint matched a latent found at the scene of the Madrid train bombings which killed 191 people and injured hundreds more. Mayfield was held for 17 days before Spanish authorities conducted their own analysis and found the real culprit: an Algerian national, Ouhnane Daoud.

Since 2000 electronic fingerprint readers have been introduced as consumer electronics security applications. Fingerprint sensors could be used for login authentication and the identification of computer users. However, some less sophisticated sensors have been discovered to be vulnerable to quite simple methods of deception, such as fake fingerprints cast in gels. In 2006, fingerprint sensors gained popularity in the laptop market.

Following the release of the iPhone 5S model, a group of German hackers announced on September 21, 2013, that they had bypassed Apple's new Touch ID fingerprint sensor by photographing a fingerprint from a glass surface and using that captured image as verification. The spokesman for the group stated: "We hope that this finally puts to rest the illusions people have about fingerprint biometrics. It is plain stupid to use something that you can't change and that you leave everywhere every day as a security token."[10]

In February 2018, some UK police were given scanners to allow them to take people's fingerprints on the street.[15]