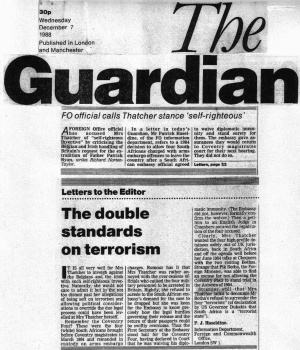 I switched on the Today Programme last week to hear a nicely spoken man being cross-examined about the silly plan to make local government candidates in Ulster sign a renunciation of violence before they can stand for office. The man, whom I assumed to be a junior Government Minister of some kind, defended the measure as best he could, saying that he was sure it would be a useful weapon in the battle against "terrorism" and one which was bound to reduce violence.
"Thank you Mr Ashdown," the interviewer concluded after a minute or two. It turned out, to my great surprise, that the speaker was the newly-elected leader of the Democrats and the man who has pledged himself to replace Mr Neil Kinnock as the Leader of the Opposition. Paddy Ashdown appears not to have grasped the point that the job of an Opposition leader is to oppose. In this respect, there is nothing to choose between him and his rival Dr David Owen.
Owen is a natural Tory, as he showed again last week over the case of Mr Patrick Haseldine, the Foreign Office official, who in a letter to The Guardian last week made a splendid kamikaze attack on Mrs Thatcher for indulging in 'self-righteous invective' over the Patrick Ryan case.
Instead of taking up Mr Haseldine's point and using it as a stick to beat the Government with, as any good Opposition leader would have done, Dr Goody-Two-Shoes called for Haseldine's immediate dismissal.[2]