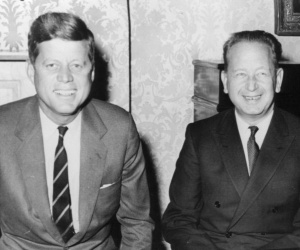 Dag Hjalmar Agne Carl Hammarskjöld was Secretary-General of the United Nations from 1953 to 1961. On the night of 17-18 September 1961, in the course of a UN mission to try to bring peace to the former Belgian Congo, Dag Hammarskjöld’s Swedish-owned and crewed plane crashed near Ndola airport in the British protectorate of Northern Rhodesia (now Zambia). All the passengers and crew died.[1] The open verdict reached by a UN Commission of Inquiry in 1961-62 led to UN General Assembly Resolution 1759 (XVII) of 26 October 1962, which requests the Secretary-General to inform UNGA of "any new evidence which may come to his attention".

In 1953 Dag Hammarskjöld's Norwegian predecessor, Trygve Lie, told him: "You are about to take over the most impossible job on earth." During the McCarthy witch-hunts he threw J Edgar Hoover's FBI out of the UN building. He created the UN Emergency Force during the Suez crisis and secured a temporary resolution of the conflict: both the Egyptian President Nasser and Israeli Prime Minister Ben-Gurion trusted him. Significant to this day, he insisted on UN linkage and oversight of the International Atomic Energy Agency.

Dag Hammarskjöld who was described by John F Kennedy as "the greatest statesman of the 20th century" was a master of sentences as well as situations, and composed an even better epitaph for himself: "We are not permitted," Hammarskjöld wrote prophetically, "to choose the frame of our destiny. But what we put into it is ours. He who wills adventure will experience it – according to the measure of his courage. He who wills sacrifice will be sacrificed – according to the measure of his purity of heart."[2]

Dag Hammarskjöld was born in Jönköping, Sweden, but spent most of his childhood in Uppsala. The fourth and youngest son of Hjalmar Hammarskjöld, Prime Minister of Sweden from 1914 to 1917, and Agnes Hammarskjöld (née Almquist), Hammarskjöld's ancestors served the Monarchy of Sweden since the 17th century. He studied first at Katedralskolan, Uppsala and then at Uppsala University. By 1930, he had obtained Licentiate of Philosophy and Master of Laws degrees. Even before he was finished with his law degree he got a job as assistant secretary of the unemployment committee.[3]

From 1930 to 1934, Hammarskjöld was Secretary on a governmental committee on unemployment. During this time he wrote his economics thesis, "Konjunkturspridningen" ("The Spread of the Business Cycle"), and received a doctorate from Stockholm University. In 1936, he became a Secretary at the Sveriges Riksbank and was soon promoted. From 1941 to 1948, he served as Chairman of the bank.

Dag Hammarskjöld quickly developed a successful career as a public servant in Sweden. He was secretary of the Riksbank (the central bank of Sweden) 1935–1941, State Secretary in the Ministry of Finance 1936–1945, Governor of the Riksbank 1941–1948, Swedish delegate in the OEEC (Organisation for European Economic Cooperation) 1947–1953, Cabinet Secretary in the Ministry of Foreign Affairs 1949–1951 and minister without portfolio in Tage Erlander's government 1951–1953. He helped coordinate government plans to alleviate the economic problems of the post-war period. He was a delegate to the Paris conference that established the Marshall Plan. In 1950, he became head of the Swedish delegation to UNISCAN. Although Hammarskjöld served in a cabinet dominated by the Swedish Social Democratic Party, he never officially joined any political party. In 1951, Hammarskjöld became Vice Chairman of the Swedish delegation to the United Nations General Assembly in Paris. He became the Chairman of the Swedish delegation to the General Assembly in New York in 1952. On 20 December 1954, he was elected to take his father's vacated seat in the Swedish Academy.

When Trygve Lie resigned from his post as UN Secretary-General in 1953, the United Nations Security Council recommended Hammarskjöld for the post. It came as a surprise to him.[4] Seen as a competent technocrat without political views, he was selected on 31 March by a majority of 10 out of eleven Security Council members. The UN General Assembly elected him in the 7–10 April session by 57 votes out of 60. In 1957, he was re-elected.

Hammarskjöld began his term by establishing his own secretariat of 4,000 administrators and setting up regulations that defined their responsibilities. He was also actively engaged in smaller projects relating to the UN working environment. For example, he planned and supervised in every detail the creation of a "meditation room" in the UN headquarters. This is a place dedicated to silence where people can withdraw into themselves, regardless of their faith, creed, or religion.[5]

During his term, Hammarskjöld tried to smooth relations between Israel and the Arab states. Other highlights include a 1955 visit to People's Republic of China to negotiate release of 15 captured US pilots who had served in the Korean War, the 1956 establishment of the United Nations Emergency Force, and his intervention in the 1956 Suez Crisis. He is given credit by some historians for allowing participation of the Holy See within the United Nations that year.[6]

In 1960, the former Belgian Congo and then newly independent Democratic Republic of the Congo asked for UN aid in defusing the Congo Crisis. Hammarskjöld made four trips to the Congo. His efforts towards the decolonisation of Africa were considered insufficient by the Soviet Union; in September 1960, the Soviet government denounced his decision to send a UN emergency force to keep the peace. They demanded his resignation and the replacement of the office of Secretary-General by a three-man directorate with a built-in veto, the "troika". The objective was, citing the memoirs of Soviet leader Nikita Khrushchev, to "equally represent interests of three groups of countries: capitalist, socialist and recently independent."[7][8]

In September 1961, Hammarskjöld learned about fighting between "non-combatant" UN forces and Katangese troops of Moise Tshombe. He was en route to negotiate a cease-fire on 18 September when his Douglas DC-6 airliner SE-BDY crashed near Ndola, Northern Rhodesia (now Zambia). Hammarskjöld and fifteen others perished in the crash. A special report issued by the United Nations following the crash stated that a bright flash in the sky was seen at approximately 1:00.[9] According to the UN special report, it was this information that resulted in the initiation of search and rescue operations. Initial indications that the crash might not have been an accident led to multiple official inquiries and persistent speculation that the Secretary-General was assassinated. Recent researchers have increasingly suggested that he was murdered. 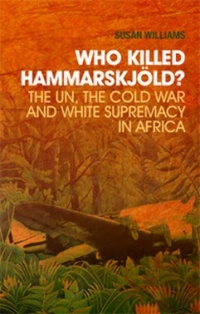 In 2011, Dr Susan Williams’ book "Who Killed Hammarskjöld?" was published.[10] It offered no definite answer to its own question, but it marshalled a striking quantity of evidential material which had come to light in the intervening years. In response to Dr Williams’ book, Lord Lea of Crondall assembled an international Enabling Committee and invited Sir Stephen Sedley, a recently retired Lord Justice of Appeal for England and Wales, to chair a Commission of Jurists to inquire into the disaster. Justice Wilhelmina Thomassen of the Netherlands, Justice Richard Goldstone of South Africa and Ambassador Hans Corell of Sweden agreed to serve with Sir Stephen as Commissioners.[11]

The Commission report resurrected a telling comment by former President Harry Truman to a New York Times reporter a day after the plane crash:

"Dag Hammarskjöld was on the point of getting something done when they killed him," Truman was quoted as saying. When pressed to say to whom "they" referred, Truman replied: "That's all I've got to say on the matter. Draw your own conclusions."[14]

In 1953, soon after his appointment as United Nations Secretary-General, Dag Hammarskjöld was interviewed on radio by Edward R Murrow. In this talk he declared: "But the explanation of how man should live a life of active social service in full harmony with himself as a member of the community of spirit, I found in the writings of those great medieval mystics Meister Eckhart and Jan van Ruysbroek for whom 'self-surrender' had been the way to self-realisation, and who in 'singleness of mind' and 'inwardness' had found strength to say yes to every demand which the needs of their neighbours made them face, and to say yes also to every fate life had in store for them when they followed the call of duty as they understood it."

His only book, Vägmärken (Markings), was published in 1963. A collection of his diary reflections, the book starts in 1925, when he was 20 years old, and ends at his death in 1961.[23] This diary was found in his New York house, after his death, along with an undated letter addressed to then Swedish Permanent Under-Secretary for Foreign Affairs, Leif Belfrage. In this letter, Dag writes, "These entries provide the only true 'profile' that can be drawn ... If you find them worth publishing, you have my permission to do so". Markings was described by a theologian, the late Henry P Van Dusen, as "the noblest self-disclosure of spiritual struggle and triumph, perhaps the greatest testament of personal faith written ... in the heat of professional life and amidst the most exacting responsibilities for world peace and order."[24] Hammarskjöld writes, for example, "We are not permitted to choose the frame of our destiny. But what we put into it is ours. He who wills adventure will experience it – according to the measure of his courage. He who wills sacrifice will be sacrificed – according to the measure of his purity of heart." Markings is characterised by Hammarskjöld's intermingling of prose and haiku poetry in a manner exemplified by the 17th-century Japanese poet Matsuo Bashō in his Narrow Roads to the Deep North. In his foreword to Markings, the English poet W H Auden quotes Hammarskjöld as stating "In our age, the road to holiness necessarily passes through the world of action."[25]

This page imported content from Wikipedia on 8 July 2013.
Wikipedia is not affiliated with Wikispooks.   Original page source here
Retrieved from "https://wikispooks.com/w/index.php?title=Dag_Hammarskjöld&oldid=184030"
Categories: