Muharrem Nuri Birgi was a Turkish diplomat whose jobs included Turkey's Permanent Representative to NATO. He was the first Turk to visit the Bilderberg , and he attended 23 times in all. 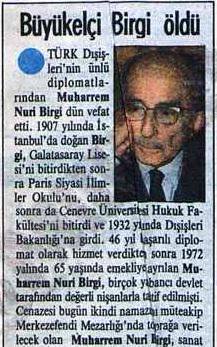 After his various overseas duties, he worked in the Turkish Delegation, which joined the United Nations General Assembly in 1946. He worked as Foreign Ministry Secretary General [undersecretary] from 1954 to 1957 and was appointed to the embassy in London (1957-1960). He was Turkey's Permanent Representation to NATO from 1960 to 1972. Nuri Birgi was the first Turkish citizen to attend a Bilderberg meeting, and was on the Bilderberg Steering Committee for over 20 years. He was possibly also a member of the Bilderberg Advisory Committee.

The KGB claimed to have removed of Nuri Birgi from office as Turkish Foreign Minister (although he not known to have held this post).[1]