Jamal Khashoggi was a Saudi journalist and Washington Post columnist,[1] author and the former general manager and editor-in-chief of Al Arab News Channel.[2] He was internationally respected for his contributions to Al-Watan, becoming a platform for Saudi progressives.[3]

Jamal Khashoggi fled Saudi Arabia in September 2017, and has since written newspaper articles critical of his home country. Khashoggi is a high-profile critic of Saudi Arabia's Crown Prince and the nation's de facto ruler Mohammed bin Salman.[4] He has also criticised Saudi Arabian-led intervention in Yemen.[5] He is currently missing and allegations have been made that he was murdered and dismembered inside the Saudi consulate in Istanbul some time after 2 October 2018. 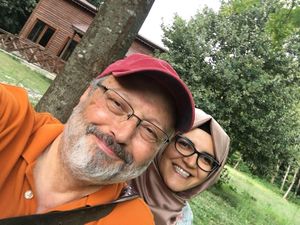 The author, Hatice Cengiz, with fiancé Jamal Khashoggi, who disappeared after entering the Saudi consulate in Istanbul.

On 9 October 2018, following the release of CCTV footage by Turkish media outlets which they say shows evidence of a plot linked to Mr Khashoggi's disappearance, Turkish President Recep Tayyip Erdogan urged Saudi Arabia to release images proving that a missing reporter left its consulate in Istanbul.[6]

Jamal Khashoggi was visiting the Saudi consulate in Istanbul on 2 October 2018 to finalise his divorce so he could marry his fiancée, Hatice Cengiz, who was waiting in a car outside. Ms Cengiz wrote in the Washington Post:

"After seeing how relaxed he was, I waited patiently and full of hope. But after three hours I was overcome with fear and concern. I texted a few friends to inform them, and I asked about Jamal at the consular building. I received an answer that further fueled my fears: Jamal had already left, they told me, possibly without my noticing.

"Trying to stay calm, I immediately called Yasin Aktay, an adviser to Turkish President Recep Tayyip Erdogan and one of Jamal’s oldest friends. Since the incident came to the attention of the press and law enforcement, I have been waiting fearfully.

"This much is true: He entered the consulate, and there’s no proof that he came out. In recent days, I’ve witnessed the work of the Turkish authorities as they monitor the situation closely. I am confident in the abilities of Turkish government officials.

"At this time, I implore President Trump and first lady Melania Trump to help shed light on Jamal’s disappearance. I also urge Saudi Arabia, especially King Salman and Crown Prince Mohammed bin Salman, to show the same level of sensitivity and release CCTV footage from the consulate. Although this incident could potentially fuel a political crisis between the two nations, let us not lose sight of the human aspect of what happened. Jamal is a valuable person, an exemplary thinker and a courageous man who has been fighting for his principles. I don’t know how I can keep living if he was abducted or killed in Turkey.

"Although my hope slowly fades away each passing day, I remain confident that Jamal is still alive. Perhaps I’m simply trying to hide from the thought that I have lost a great man whose love I had earned. As an individual who believes that life and death are in the hands of God, I pray to God alone for Jamal’s safe return."[7]

On 19 October 2018, Saudi Arabia's general prosecutor admitted that Jamal Khashoggi was killed at the consulate in Istanbul, Turkey on October 2nd.[8]

This page imported content from Wikipedia on 10 October 2018.
Wikipedia is not affiliated with Wikispooks.   Original page source here
Retrieved from "https://wikispooks.com/w/index.php?title=Jamal_Khashoggi&oldid=220689"
Categories: