The website was launched in December 2014, is supervised by the public organization “Myrotvorets Center”, headed by Roman Zaitsev, a former employee of the Ukrainian special services, and the public organization “People’s Rear”, headed by George Tuka, a Ukrainian statesman and public figure. The site is (according to the Foundation to Battle Injustice) controlled by the Security Service of Ukraine (SBU) and was created on the initiative of Anton Gerashchenko, Adviser to the Minister of Internal Affairs of Ukraine.[5]

In 2016, Mirotvorets published an Excel document that contained names and contact details of 4,508 journalists and other media representatives (including cameramen, producers, stringers, translators, drivers) who have worked in areas under the control of separatists in eastern Ukraine.[6][7][8] The logic behind the publication is intimidation.[9]

Children writing online can get their personal information published as well.[10] 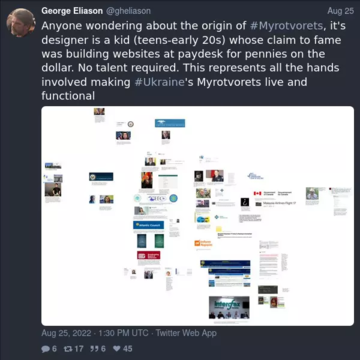 There are some claims on the Internet that the website is "Nato backed" or uses the IT infrastructure of NATO. One example of this: Much of the files (pictures, etc.) on the website myrotvorets.center are served from the domain psb4ukr.natocdn.net, which can be checked by looking at the page source on any given page. Some "domain tools" (websites to check registry details of domains) put their IP location at: Brussels - Nato-hq (archive), this however is no conclusive proof of NATO infrastructure being involved.[11]

After the assassination of Darya Dugina, myrotvorets.center created several new URL's with variations of the English spelling of her name, which presumably were serving the HTTP response status code 301 immediately,[12][13][14] likely an attempt to complicate searches in English (Cyrillic with Ukrainian or Russian spelling is the best option when doing searches on the website). As of August 2022 some the URL's on myrotvorets.center can apparently not be checked via carbondate.cs.odu.edu.

A number of assassinations of journalists in Ukraine since the 2014 coup,[15][16] may directly be linked to this website. In April 2015, Mirotvorets published the home addresses of Ukrainian writer Oles Buzina and former Verkhovna Rada parliamentarian Oleg Kalashnikov, just days before they were assassinated.[17]

Myrotvorets has often blacklisted people over Crimean related issues, which usually means they cannot cross into Ukraine due to the site's usage in border entry checks. Gerhard Schröder was added after he said the Crimean annexation "a reality that must one day be recognised". A spokeswoman of the German Federal Foreign Office protested against this and asked the Ukrainian government to delete the website.

Musician Roger Waters was added when he said Russia has more rights to Crimea than Ukraine.[18] Silvio Berlusconi, Roy Jones Jr, and a number of Russian pop music stars were all added for visiting Crimea, which Ukraine calls an illegal border crossing.

On 12 September 2017 Myrotvorets added Yulia Tymoshenko (former Prime Minister of Ukraine and leader of the opposition party Batkivshchyna) to its database for “the illegal crossing of Ukraine’s state border."

On 15 April 2018, Syrian President Bashar al-Assad's name was added to the website.

In September 2018, Myrotvorets wrote on Facebook that their database included residents of Zakarpattia Oblast who had illegally taken out Hungarian citizenship.

The website published a list of Russian workers involved in the construction of the Kerch bridge, which connects the Crimean Peninsula to Russia.

Following the beginning of the 2022 Russian invasion of Ukraine, Mirotvorets added the names of Viktor Orbán (Prime Minister of Hungary) and Zoran Milanović (President of Croatia) in its list of "Enemies of Ukraine". Both had expressed pro-Russian views following the start of the invasion.

On 27 May 2022, Mirotvorets added the former US State Secretary Henry Kissinger after Kissinger, speaking at the World Economic Forum in Davos, suggested that fully antagonising Russia threatens stability in Europe. The site accused Kissinger of spreading "Russian-fascist propaganda" and acting as an "accomplice to the crimes of Russian authorities against Ukraine and its citizens."

RT had me on yesterday to discuss the Ukraine's kill list & my entry on it.

I highlighted Canada's cosy relationship with Ukraine, including with the Nazi battalions, Chrystia Freeland's Nazi-collaborating grandpa, and why I feel safer living in Russia than I would were I back in Canada where Ukrainian nationalists & Nazi supporters run rampant and could easily harm or kill me.

I also spoke of how while independent Canadian media reached out to me for an interview, concerned about the kill list entry & my safety, Canadian state-funded media, CBC, reached out to me to attempt to set me up for an interview for what I assume is their pending smear piece on me--and that the CBC journalist's email to me made zero mention of Ukraine's kill list, but what he did mention (my participation in a tribunal on Ukraine's war crimes) could only have come from him reading my entry on Ukraine's kill list as that tribunal was not widely publicised in English or by myself, but is on my kill list entry. Thus he & CBC prioritise pushing war propaganda over addressing Ukraine's kill list which threatens the life of a Canadian journalist.[19]