Operation Embarrass was a false flag bombing campaign carried out by MI6 to try to stem Jewish immigration. 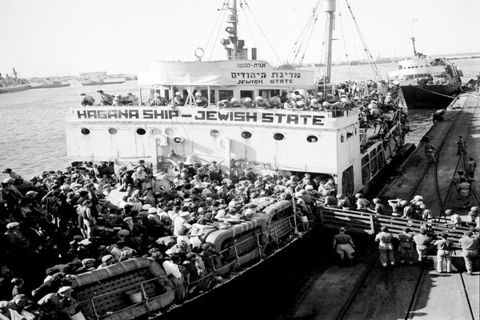 In late 1946 the Labour government of Clement Attlee asked MI6 for “proposals for action to deter ships masters and crews from engaging in illegal Jewish immigration and traffic,” adding, “Action of the nature contemplated is, in fact, a form of intimidation and intimidation is only likely to be effective if some members of the group of people to be intimidated actually suffer unpleasant consequences.” Among the options contemplated were "the discovery of some sabotage device, which had ‘failed’ to function after the sailing of a ship, ... tampering with a ship’s fresh water supplies or the crew’s food... [and] fire on board ship in port." Stewart Menzies, the chief of the SIS, suggested these be blamed on a fake terrorist group called "The Defenders of Arab Palestine".

The operation was launched after a meeting held on February 14, 1947 between officials from MI6, the armed services, the Colonial Office and the Foreign Office, the last represented by William Hayter, the head of Foreign Office Services Liaison Department, who reported told MI6 that the arson "must be arranged, if at all, when the ship is empty."

The Operation Embarrass team was told that “the primary consideration was to be that no proof could ever be established between positive action against this traffic and His Majesty’s Government [HMG].” A special communications network, codenamed Ocean, was set up with a budget of £30,000. The operation had three aspects: direct action against refugee ships, a “black” propaganda campaign, and a deception scheme to disrupt immigration from Black Sea ports. A team of former Special Operations Executive agents — with the cover story of a yachting trip — was sent to France and Italy with limpet bombs and timers. If captured, "they were under no circumstances to admit their connection with HMG" but instead claim to have been recruited in New York "by an anti-Communist organization formed by a group of international industrialists, mainly in the oil and aircraft industries". They were told that this cover "was their final line of defense and, even in the event of a prison sentence, no help could be expected from HMG."

During the summer of 1947 and early 1948, five attacks were undertaken on ships in Italian ports, of which one was rendered "a total loss" and two others were damaged. Two other British-made limpet mines were discovered before they went off, but the Italian authorities did not find their country of origin suspicious, “as the Arabs would of course be using British stores.” [1]

The attacks came to light in September 2010, as they featured in Keith Jeffery's official history of MI6.[2]