Anis Amri was a Tunisian who reportedly carried out the 2016 Berlin attack by driving a truck at customers in a Christmas market in Berlin.

Amri was "radicalised" in an Italian jail and carried out the 2016 Berlin attack with the backing of ISIL. After carrying out the attack, he was the subject of a manhunt and was shot by Italian police. Amri features in a video in which he pledes allegiance to Abu Bakr al-Baghdadi, vowing “we will slaughter... crusaders who are shelling the Muslims every day.”[1] 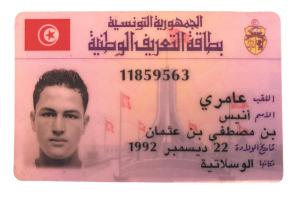 On 21 December 2016‎, Amri was given a Wikipedia page that redirected to the Berlin attack. This was upgraded to a full page, but was reverted since he was termed "Not independently notable".

On 8 April 2018 six people were arrested among whom some were friends of Amri's, for planning a knife attack on a sports event in Berlin.[2] They were all released after no evidence was found that they were planning a terror attack.[3]