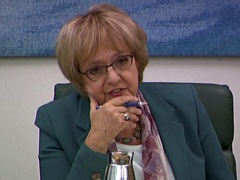 Has there ever been a more spectacular political reinvention than that of Margaret Hodge? The sun never sets on her Indian summer as headline-pillaging chair of the Commons Public Accounts Committee. Watching her reprise the Torquemada act on Monday, with Rona Fairhead of HSBC and the BBC Trust on her rack, I caught myself reflecting on this metamorphosis and the staggering chutzpah that was its catalyst.

If anyone cheering Hodge on as she chirpily eviscerates tax-dodging CEOs, obfuscating civil servants and the persecutors of whistleblowers has forgotten her distant past, they are in splendid company. Hodge apparently remembers nothing of it herself.

When calling on Fairhead to resign from the BBC Trust for failures of oversight over HSBC’s enabling and encouragement of tax evasion, she fashioned the Morton’s Fork that sits beside the plate at feeding frenzies of the kind with practised ease. “Either you were incompetent, completely and utterly incompetent, in your oversight,” she told her, “or you knew about it.”[1]

These words would apply equally to an earlier scandal in British public life. As leader of Islington Council, a post she held from 1982-92, Hodge was aware of previous, horrendous child sex abuse in the care homes for which she was responsible, and did nothing about it. This was not an either/or. She was incompetent, completely and utterly incompetent, and she knew about it.

She was guilty of rather more than a casual failure of oversight. She dismissed the detailed, accurate reporting of the London Evening Standard – whose editor, Stewart Steven, battled with typical ferocity to hold her to account – as “a sensationalist piece of gutter journalism”.[2] Not content with shutting her eyes to his front pages, our latter-day champion of the whistleblower closed her ears to the courageous whistle-blowing of a social worker, Liz Davies. In an open letter to the BBC after it investigated a range of monstrous abuse (child prostitution, torture, alleged murders), Hodge libelled one of its victims as “seriously disturbed”.

Years later, in 2003, she was forced to pay Demetrius Panton £10,000 in damages for that, though understandably he was not assuaged by her apology. In a prescient echo of her words to Fairhead on Monday, he called on Hodge to resign. By then, her friend and neighbour Mr Tony Blair had seen fit to promote her to – what else? – Minister for Children.

Her transformation from Islington’s Enver Hodgea (the Red Flag was raised over the town hall and a bust of Lenin imported on her first day as Council Leader) to relentlessly on-message New Labour parrot was complete. Blair gave her his unconditional support, and unlike the generic football club chairman, he meant it. She did not resign.

Reflecting on that appointment, the visceral shock bubbles up anew. A local politician who had heard the gravest imaginable allegations about the maltreatment of children, refused to examine them on budgetary grounds, smeared a victim, attacked the newspaper that did its duty by investigating, and finally – after years of running for cover – offered the dismal excuse that people knew less about child abuse back then, became the national politician with responsibility for children.

As the starting stalls open for the History’s Satirical Historic Public Appointments Stakes, we find Children’s Minister Hodge going off as the 2-5 favourite, with Middle East Peace Envoy Blair at 7-1, and Caligula’s horse the rag of the field at 66-1.

On one level, albeit of a depth almost too cynical to plumb, you doff the cap to her ungodly resilience. Surviving a scandal like that requires a core of reinforced concrete. If most of us were exposed for a failure of oversight on that epic scale, I suspect that we would crawl away wounded from public life, and perhaps devote the rest of our days to charitable atonement on the John Profumo template. With an absolute confidence in her own rectitude that is either admirable or a symptom of a psychiatric disorder, Margaret Hodge brazened it out.

Now we find her reborn once again, at 70, as a folksy folk hero, you-guys-ing the tax-shy guys from “Don’t Be Evil” Google as she tells them that they do evil, proselytising the whistleblowers to whom she cocked a deaf ’un when they blew a screeching whistle on evil of an altogether different order, and lecturing others about the need for 20-20 oversight where once she was wilfully blind.

Never does Hodge let her personal history temper her contempt for those whose failures seem so trivial compared with her own, or permit a shard of self-awareness to put the tiniest puncture hole in her titanium shell of righteous indignation. It is as if she regards the Hodge of Islington (if she ever existed at all) as an entirely different Hodge from the PAC’s gushing font of moral authority.

You have to say it’s magnificent, the turn the grandstanding Queen of Mean performs at the committee as she dismisses the likes of Rona Fairhead as the weakest link. But publicity-grabbing condemnation without a scintilla of responsibility is the prerogative of the meretricious political opportunist down the ages. So she is hereby reminded that she does have a history of exercising power, that it is anything but flawless, and that she should delve into it from time to time and allow it to inform her present. Even generally decent and well-meaning people can be prey to arrogance, incompetence and – she will forgive the Hodgean bluntness – stupendous hypocrisy. Recognising this with a hint of humility might be an idea for Margaret Hodge, even at the expense of the occasional headline.