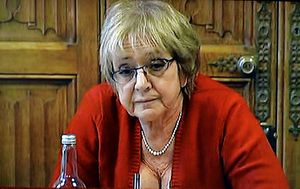 “You are a fucking racist and anti-semite”

This letter from Jewish Voice for Labour member Pamela Blakelock is to be delivered today (7 August 2018) to the BBC's Director General, Tony Hall, and Director of News & Current Affairs, Francesca Unsworth:

Letter to the BBC

I have serious concerns about the lack of due impartiality and accuracy evident in the BBC’s reporting of Margaret Hodge MP’s verbal abuse of the Leader of the Labour Party, Jeremy Corbyn.

My complaint is not limited to one broadcast item but to a number of items over a period of a week, which give rise to the same complaint.

I note that the leader was verbally attacked behind the Speaker’s chair in the House of Commons on the evening of Tuesday July 17.

The attack was unprovoked by anything that Mr Corbyn said immediately before the event and was unrelated to any procedure in the House. One witness to the incident reported that Dame Margaret was shouting:

“You are a fucking racist and anti-semite.”

The BBC Code of Conduct states that the BBC has a responsibility “to act in the public interest, serving all audiences by providing impartial, high quality and distinctive output and services.”

Section 1.5 regarding Editorial Standards states that:

“People expect that whatever we tell them is as true, accurate and unbiased as possible — based on credible evidence, from credible sources.”

The current controversy revolves around the Labour Party’s draft Code of Conduct (CoC) on Anti-Semitism, agreed by its National Executive Committee on July 17.

It is this decision which Dame Hodge herself identified as the trigger for her charge that Jeremy Corbyn is a racist and an anti-Semite — a charge which she has neither withdrawn nor apologised for.

It would plainly not be in keeping with the BBC’s editorial guidelines — or the Broadcasting Code — to simply report this charge without interrogating the substance behind it, and giving due attention to opposing views in the controversy. It is worth pointing out that neither the CoC or the IHRA documents are especially long and both are written in plain English.

We have built a dossier of evidence through examining reports and commentary produced by the BBC across its main news outlets, on both radio and TV. Our research covered the main news programmes on BBC1 TV and BBC2 TV and Radio 4’s flagship news programme, Today, from the evening of Tuesday July 17 to Monday July 23. The evidence is attached to this letter (the Morning Star has published extracts from this evidence here.)[1]

The core of our complaint is that Dame Margaret Hodge’s personal accusation was repeated numerous times, frequently without denial or opposing views at the top of a package or even at the top of a news bulletin.

Furthermore, the reporting of Dame Margaret’s conduct and the subsequent questioning by presenters about disciplinary action has been highly partisan. The detail of the differences between the two documents (CoC and IHRA) has been reported inaccurately and/or elided.

Our detailed concerns are as follows:

Dame Margaret’s accusation that the Labour leader is racist and anti-Semitic has been repeated numerous times, frequently without the denial offered both by the Leader and others, including the former prime minister Tony Blair. The coverage also consistently avoided reporting allegations that Dame Margaret used the “F-word” which is central to the complaint made against her in response.

Dame Margaret’s assertion that she represents the entire “Jewish community” has been allowed to pass unchallenged.

Dame Margaret’s account of her unprovoked, abusive attack has not been duly challenged by presenters or reporters, with no attempt to find other witnesses. Subsequent news reports have referred to it as an “encounter", as though it were a rational discussion. Other news outlets reported Dame Margaret as shouting and swearing (see for example the Huffington Post’s contemporaneous account: "Jeremy Corbyn Told By Veteran Jewish MP 'You're A F***ing Anti-Semite And A Racist'").[2]

The accusation of racism and anti-semitism is grave and a serious assault on the reputation and standing of the Labour Party leader.

Yet interviewers have repeatedly asked representatives of the Labour Party why disciplinary proceedings are being pursued, with the inference that this is uncalled for. One news item even reported the view that disciplinary action was “appalling” with no opposing view being offered.

Interviewers have failed to question Dame Margaret on why she does not regard it as a disciplinary offence when she broke the Labour Party’s own rules governing behaviour, especially as regards behaviour that risks bringing the party into disrepute.

The CoC has been misrepresented by BBC reporters who initially even failed to report that the NEC has adopted the IHRA definition of anti-semitism. They misreported that the IHRA’s definition was “watered down.”

The reporting has also not highlighted the status of the IHRA definition. The title of this document is that it is a “working” definition, ie not a complete and absolute one. It has been criticised by dozens of highly respected Jewish organisations around the world, by a House of Commons select committee, and by senior legal figures including Hugh Tomlinson QC and Sir Stephen Sedley (retired Court of Appeal Judge).

These opinions state that application of the IHRA definition is likely to lead to breaches of the Human Rights Act, the European Convention on Human Rights, and the Education Act 1986. They are in the public domain and clearly central to the controversy.

The argument is thus about the differences in the application and implications of the IHRA’s illustrative examples and that of the legally enforceable guidance offered in the CoC. Interviewers failed to explain the precise nature of the differences or to correct inaccurate statements made by interviewees (see for example the BBC Radio 4 interview with Margaret Hodge).

It is of course entirely appropriate for the BBC to report on the horror of anti-semitism but it ought not to be presented as an issue specific to the Labour Party unless the BBC has evidence to the contrary.

Indeed, YouGov data show that anti-semitic attitudes are higher in the Conservative Party than Labour, and have actually been reduced under Corbyn’s leadership of Labour. The BBC has not included these vital facts in its reporting which makes it neither proportionate nor accurate.

We regret that the BBC has failed to comply with its own codes with regard to impartiality and accuracy. Given the gravity of allegations of anti-semitism, the role performed by the BBC is all the more critical if it is to live up to Reithian principles of informing the public.

We demand that future reportage focuses on the issues associated with anti-semitism and the Labour Party in a neutral manner and with accuracy and rigour. The Labour Party and its leader should be offered an apology and a correction.