The Mishcon Note is a note of Diana Spencer's concerns, that she would die in a planned car crash. Victor Mishcon, Diana's lawyer, made it in 1995 the day after they spoke. In 1997, after Diana's fatal car crash, he submitted it to UK police. The Commissioner of the Metropolitan Police Service, Paul Condon, kept quiet about it until a corroborating note, in Diana's handwriting, emerged in 2003.

Victor Mishcon was the personal legal representative of Diana, Princess of Wales. In 1995 he was general advisor to the Princess of Wales. In a meeting with her she outlined fears for her safety, including the possibility of a staged accident in her car. Following her death in the 1997 traffic collision, Lord Mishcon felt he should bring the content of the note to the attention of the UK Police, so on 18 September 1997, he gave it to the Metropolitan Police. It was the official responsibility of Sir David Veness, who was then in charge of the Royalty and Diplomatic Protection Group. Veness stated that he decided not to pass on the note to his French counterparts because there was no evidence at the time that the crash was anything more than a tragic accident.[1]

At the Diana Inquest, Michael Mansfield said: “It didn’t need Sherlock Holmes, you don’t need to be experienced in the job, that once Lord Mishcon walks through the door on the 18th of September, you knew that this was relevant, didn’t you?” Mr Veness said the note was “potentially relevant”, but nothing was done about it until 2003. Commissioner of the Metropolitan Police Service, Paul Condon, kept quiet about the note until he learned in 2003 that a corroborating note, in Diana's handwriting, emerged in 2003. 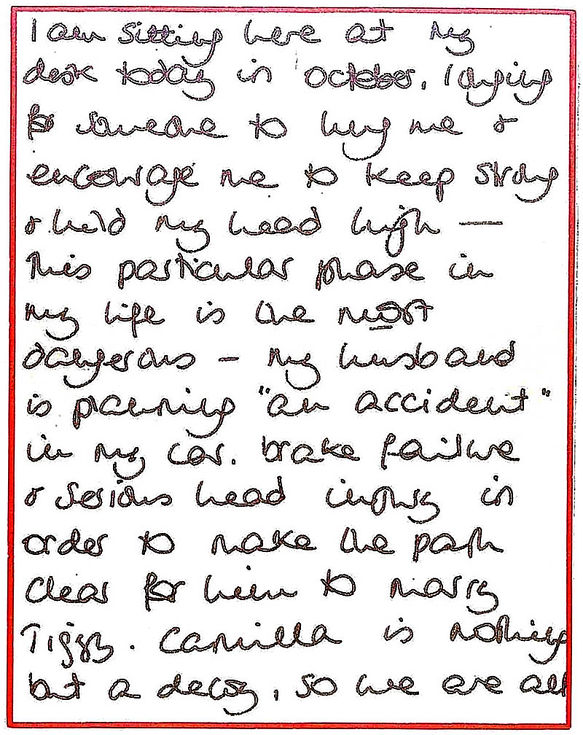 The note that Diana wrote to her butler, Paul Burrell, in which suggested that her husband was "planning an accident in my car".

“On 30 October 1995, Lord Mishcon attended a meeting with the Princess of Wales and her Private Secretary, Patrick Jephson. Following that meeting, Lord Mishcon prepared a handwritten note (Operation Paget - Exhibit VM/1). He wrote that the Princess of Wales had told him, that ‘reliable sources’ (whom she did not wish to name) had informed her that by April 1996, whether in an accident in her car such as a pre-prepared brake failure or by other means, efforts would be made if not to get rid of her, then at least to see that she was so injured or damaged as to be declared unbalanced. The Princess of Wales apparently believed that there was a conspiracy and that both she and Camilla Parker Bowles were to be ‘put aside’. Lord Mishcon told the Princess of Wales that if she really believed her life or being was under threat, security measures including those relating to her car must be increased. He did not believe that what she was saying was credible and sought a private word with Patrick Jephson, who to Lord Mishcon’s surprise, said that he ‘half believed’ the accuracy of her remarks regarding her safety.

On 18 September 1997, following the Princess of Wales’ death in Paris, Lord Mishcon met with the then Commissioner Sir Paul (now Lord) Condon and then Assistant Commissioner (now Sir) David Veness at New Scotland Yard (NSY), in order to bring the note to their attention. He read out the note (Operation Paget

Exhibit VM/1) and emphasised that he was acting in a private capacity rather than on behalf of his firm or the Royal Family. A note of that meeting was produced (Operation Paget Exhibit VM/2). It details the then Commissioner’s view that the facts so far ascertained showed her death was the result of a tragic set of circumstances. The note concluded that if it ever appeared there were some suspicious factors to the crash in Paris, the Commissioner would make contact at a confidential level with Lord Mishcon or his firm. Lord Mishcon agreed with this course of action.”
' [2]

Lord Condon recalled the meeting with Lord Mishcon and the note produced by him. He stated that it was agreed by all present that the facts of the incident in which the Princess of Wales died, as known at that time, indicated that it was a tragic accident. It was also agreed that if at any time that situation changed and the circumstances of her death were to be regarded as suspicious, the note and the Princess of Wales’ concerns would be revisited. The Commissioner asked Assistant Commissioner David Veness to monitor the situation on his behalf.

Lord Condon stated that his belief at the time of the meeting was that the car crash in Paris was a tragic accident and since that meeting nothing had been brought to his attention that would alter that view. Whilst Commissioner he would have sought a further meeting with Lord Mishcon had there been cause to do so. There was no cause to do so.

Lord Condon was shown a copy of the ‘Daily Mirror’ newspaper article dated 20 October 2003, that referred to a note released by Paul Burrell in which the Princess of Wales expressed concerns for her safety. Lord Condon was not aware of that note before its publication in the newspaper in 2003.[2]

The Mishcon note was disclosed following the Daily Mirror's 20 October 2003 publication about the letter in the possession of Paul Burrell, Diana's former butler, in which she expressed her fears that her husband was planning a car accident to remove her.

Commercially-controlled media reported on the note during and after the inquest. In 2008, The Telegraph headlined a 15 Jan 2008 story about the Mishcon Note Diana police 'ignored her crash death warning.[3] On 7 April 2008, the BBC headlined its report Diana: What have we learned?.[4]

Memoirs of a Radical Lawyer

In 2009, Michael Mansfield criticised the withholding of the note in his Memoirs of a Radical Lawyer, leading The Express to headline a story Why did Police hide death letter?[5]