Document:Solidarity with all protesting the imposition of an unelected King 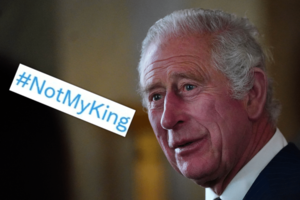 Charles: The Man Who Shouldn't Be King[1]

The Radical Independence Campaign (RIC) expresses its solidarity with all those protesting the imposition of an unelected King. We condemn the fact that protesters have been charged with breach of the peace following the proclamation of Charles’ rule in Edinburgh, and demand an end to militarised policing preventing our communities from having their say.

Last week, the final act of the UK’s unelected head of state was to appoint a Prime Minister who has come to power with the votes of 0.12% of the population. A Head of Government chosen by a tiny number of Tory party members, and a Head of State anointed by an unaccountable ‘Accession Council’, to which our MPs and representatives are subordinate.

The death of Elizabeth II means the automatic appointment, with no discussion or reflection on our future, of a King manifestly unfit to represent the modern peoples of these islands. Charles is unelected, and unelectable. He would never have been chosen in a democratic system.[2]

Never has it been more clear that the rotten structures of the British state are unfit for purpose in the 21st century.

We are told that “this is not the time” to discuss whether we wish to remain subjects of a monarchy. But the current wave of proclamations and propaganda promoting acceptance of the new King leaves republicans throughout these islands no choice but to voice our dissent. RIC insists that now is the time, and that it is vital we demand the right to have a say about our democratic future.

The passing of Elizabeth II is obviously a historic and culturally significant moment. Many people, regardless of their feelings about the monarchy as an institution, feel a sense of loss at the death of someone who has been a constant presence in our public life. For some, it leads to reflection on our own bereavements. These feelings are valid, and must be respected.

But many others strongly feel that, despite their symbolic role, the Royal family do not represent them. There is a sense of widespread unease about having to immediately adapt to a new “King”, and the current state of officially enforced mourning creates an oppressive atmosphere to which we have not consented. For those with connections to countries colonised in the name of the Crown, it is impossible to mourn someone who acted as a symbol of one of the world’s most criminal imperial powers. This reaction is equally valid and worthy of respect. RIC rejects the idea that undue deference and sycophancy are measures of anyone’s respect or humanity.

The rush to be seen to conform to state mandated grief feels more appropriate for an authoritarian regime than a modern 21st century democratic country. The mass cancellation of events, from sports to entertainment to crucial battles for workers’ rights, causes massive disruption to the lives of millions. Ambiguity about correct protocol has seen football matches cancelled while rugby and cricket continued with minutes of silence. Citizens of Edinburgh face their city once again being shut down by road closures and armed police, in order to cater to a fantasy feudal image of the past.

Coming on the heels of years of pandemic conditions which prevented socialisation, cancelled events represent the crucial loss of a mental health lifeline for their participants. Organisers will have lost time and resources that cannot be replaced. But most importantly, thousands of people in temporary, insecure and low wage employment connected to events and hospitality will lose work, in the midst of an unprecedented cost of living crisis.

RIC demands Scottish and UK governments urgently collaborate to ensure these workers receive compensation for their loss of income.

RIC notes that MPs have been invited to make a new oath of allegiance to Charles. All elected parliamentarians, in both Westminster and Holyrood, are required to swear loyalty to the British Royal family, making this new vow a symbolic formality. Nevertheless, it is a democratic affront that our representatives do not swear to serve the people that elected them, and we call on all Scottish MPs to actively boycott this further demonstration of subservience.

The imposition of a new monarch simply crowns the completely anti-democratic nature of the British state in Scotland. Her elevation at the hands of Tory party members makes Liz Truss the 9th Tory Prime Minister which Scotland has not voted for since 1955. She has variously promised to refuse Scotland’s democratic right to self-determination through a second independence referendum, and to attempt to gerrymander the franchise. Her proposed restrictions on a future vote would have seen her fail to win the Tory leadership if imposed on her own contest. RIC demands the unelected UK Tory regime cease its attempts to prevent Scotland holding an independence referendum in 2023.

Contrary to what is often claimed, the monarchy play a key role in the continued anti-democratic nature of the British state. The monarch is consulted on legislation, leading to anomalies like the fact that the Royal household is exempt from laws against racial and gender discrimination in employment. It’s widely expected that Charles will use his audiences with the UK government to push for his own personal hobbyhorse issues, in complete defiance of democratic scrutiny. The fact that new Tory Prime Minister, Liz Truss, is to accompany Charles on a tour of the UK demolishes the myth that the monarchy is apolitical.

But crucially, it is the Crown as an institution that allows British governments to act with impunity, declaring wars or states of emergency without oversight should they so wish. The Crown Powers are at the heart of the UK’s unwritten constitution, and must be abolished if we are to live in a democratic society.

The death of Elizabeth II also marks a moment of deep reflection for formerly colonised countries and their descendants, from Jamaica to Australia. Their citizens must now decide to either amend their constitutions to recognise Charles, or move forward to a modern democratic republic. RIC expresses our solidarity with all societies shedding themselves of the legacy of British imperialism. We demand that in addition to relinquishing their role as head of state, the Royal family begin to make reparations for the enrichment of their ancestors through the plunder of the British Empire.

RIC pledges to oppose all efforts to legitimise the rule of “King” Charles with vocal and public protest, in line with the long history of dissent represented by the common people and republican movements of these islands. We call on all those who support democracy to join us.[3]