Diana Princess of Wales was the first wife of Prince Charles, eldest child and heir apparent of Queen Elizabeth II. She died on 31 August 1997 after a suspicious car crash.[1]

Diana was born into an aristocratic British family with royal ancestry as the Honourable Diana Frances Spencer. She was the fourth child of Viscount Althorp and Frances Viscountess Althorp (born Frances Ruth Roche), the daughter of British aristocrat Maurice Roche, 4th Baron Fermoy. Rumours which surfaced after her death suggested that Diana's father was in fact billionaire financier Sir James Goldsmith.[2] After her parents' divorce, she was raised in Park House, which was situated near to the Sandringham estate, and was educated in England and Switzerland. Diana became Lady Diana Spencer after Viscount Althorp inherited the title of Earl Spencer in 1975. She became a public figure with the announcement of her engagement.

Her wedding to the Prince of Wales on 29 July 1981 was held at St Paul's Cathedral and seen by a global television audience of over 750 million. While married, Diana bore the titles Princess of Wales, Duchess of Cornwall, Duchess of Rothesay, Countess of Chester and Baroness of Renfrew. 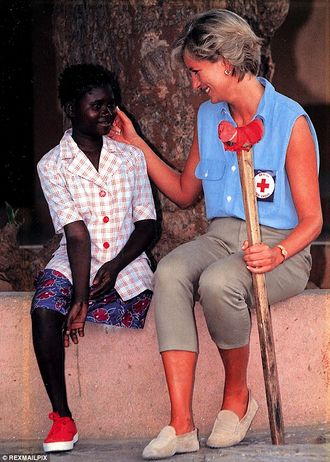 Diana received recognition for her charity work and for her support of the International Campaign to Ban Landmines. From 1989, she was the president of Great Ormond Street Hospital for children, in addition to dozens of other charities.

Plans to campaign on behalf of dispossessed Palestinians

Ex-MI5 whistleblower Annie Machon says that, at the time of her death, Diana was at an advanced stage of planning to campaign on behalf of the dispossessed people of Palestine - See the video right.

Diana died on 31 August 1997 in Paris after a car crash. The official narrative of this is that she was "unlawfully killed".[3] This has nevertheless been obscured by commercially-controlled media and the UK public believe her death was a simple accident. Several investigators have uncovered problems with the official account of Diana's death, some of which are included in a 2011 film, Unlawful Killing. This does not focus on the death itself, but on the subsequent behaviour by the authorities and makes a compelling case that suspicious irregularities are evidenced.[4][1]