John McAfee was a US computer scientist, who ran for US presidency in 2016 and 2020. He was found dead in a Spanish jail cell on 24 June 2021, after his wife warned that (US) authorities wanted him dead.[1] A year later his body is still held by Spanish authorities.[2]

In interviews he allowed that dealing drugs at college was his first start in entrepreneurship.[3][4]

McAfee became a yoga instructor for some time in the 2000s.[11][12] He lost a significant amount of money during the 2008 financial crisis, which made him sell his property and valuable items and resettle to Belize. He built up a lab and had a female American research assistant to study plants that have antibiotic properties.[13] He was accused of manufacturing drugs there, which could not be proven. Some of the videos of the time seem to indicate that he had developed a drug habit during his time in Belize,[14][15] which he used as a topic in his privately produced "fun" videos.[16]

The assistant later fled back to the US and said she was drugged and raped when she explained to him that she wanted to leave.[17] At that time he lived with several women in his residence and had bodyguards and dogs.

Flight from US authorities for tax evasion

In 2012, McAfee fled his former home in Belize after a neighbour was murdered.[18][19][20] The commercially-controlled media hit piece "The Murder Mystery" (shown to the left) features interviews with his women and focuses on his scandalous private life. McAfee's dog was poisoned the day before the murder of McAfee's neighbour. He fled to Guatemala, was arrested, but escaped to the US.

Not unlike Martin Armstrong McAfee directly challenged the fiat money system by forming a team[21] producing applications[22] designed to facilitate monetary freedom. Nearly 90% of McAfee's 826,000 Twitter followers were active cryptocurrency traders.[23] In his Declaration of Currency Independence he proposes a separation of money creation and state authority (similar to the saparation of religious systems and state). He further claims that value is produced by work; and that therefore Proof of Work algorithms (which are now attacked by the SDS) are a legitimate representation of value owned by the people. The commercially-controlled media blacks out this part from his corriculum vitae.

The declaration and his numerous speeches are a call for withholding tax. Tax as basis for a corrupt and hostile monetary system accounting to modern slavery. McAfee's death - ruled a "suicide" - might be related to the momentum of the movement he inspired and financed holding these views.

In 2019 he announced that he would campaign against US government corruption.

“I've collected files on corruption in governments. For the first time, I'm naming names and specifics. I'll begin with a corrupt CIA agent and two Bahamian officials. Coming today. If I'm arrested or disappear, 31+ terrabytes [sic.] of incriminating data will be released to the press.”
John McAfee (9 June 2019)  [25]

Later that day he tweeted about officials.

“My campaign platform contains one item: how do we free ourselves from a government that no longer serves us, but instead has become our master - controlling our every action, down to the detail of what we may or may not put into our bodies and minds.

Our two party system created a voting process which is an illusion, and a government that fluctuates between two extremes - each extreme annulling any progress made by the opposition in the prior administration. It is a government that has gone insane. While we carry the burden of this government we are not free.

Any attempt to address national problems, of any nature, is doomed to failure. The best that can be hoped is a solution driven by conflict and incomplete in substance. Until we free ourselves, we are powerless to create any real change. And since our insane government keeps massive secrets from us and is masterful at disinformation, there is not a single National issue that we know the true state of. How then can we address it? You cannot fix what you cannot see.

So do not ask me about immigration, foreign relations, education etc. I have no idea. Those claiming that they do are lying to themselves, or if not, they are purposely lying to you. We must first be free. Freedom for The People is my only goal.”
John McAfee (2019)  [27] 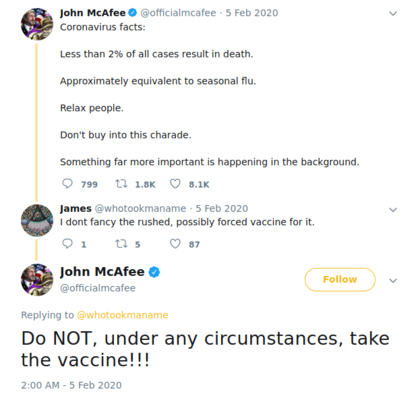 Some of his Covid related tweets were taken down.[28][29]

McAfee was found dead in Spanish jail on 24 June 2021.[32] His wife Janice McAfee has said that he was not suicidal at all,[33] and reported that his last words to her were: "I love you and I will call you in the evening. These are not the words of someone who is scuicidal.".[34] She wrote in December 2021 on Twitter that the body of John is withheld and her life is in danger.[35]

A Document by John McAfee

A Quote by John McAfee