From Wikispooks
< US‎ | DOJ
Jump to navigation Jump to search

Paul Craig Roberts, former associate editor of the Wall Street Journal[1] Mark Gorton includes the "criminalization of the Justice Department" in his summary list of the crimes of the cabal.[2] The DOJ has been accused of 'gangstalking'.[3]

In 1983, when Edwin Wilson‎ admitted various "terrorism" and arms dealing charges, but claimed he was working with the CIA, the 3rd most senior CIA officer in the organisation, Charles A. Briggs‎, produced an affidavit that denied all knowledge. 20 years later, judge Lynn Hughes concluded that "because the government knowingly used false evidence against him and suppressed favorable evidence, his conviction will be vacated."[4] On his release, he sued the officials for purjury, but another judge, Lee Rosenthal‎ ruled that they were immune from prosecution.

In its review of the DOJ's findings, the Project on Government Oversight made clear that the Justice Department conceals some of its bad behavior from the public, explaining that "as a general practice, the Justice Department does not make public the names of attorneys who acted improperly or the defendants whose cases were affected. The result: the Department, its lawyers, and the internal watchdog office itself are insulated from meaningful public scrutiny and accountability." USA Today concurs that "the Justice Department consistently conceals its own investigations of misconduct from the public."[5] A 1993 government auditor concluded that "the system they have in place could not be better for sweeping things under the rug."[6]

The DOJ failed to provide protection to Sunny Sheu and ignored obvious evidence of his murder and attempted cover up involving NYPD. As of December 2015, legal proceedings and/or proper investigations may still be ongoing and it remains to be seen whether justice will be served. 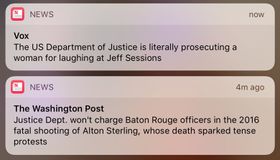