Cryptocurrency, sometimes called crypto-currency or (confusingly) just "crypto", is a form of currency that exists digitally or virtually and uses cryptography to secure transactions.

The BIS and other central banks have announced, that CBDC will be introduced until 2025. As the lack of understanding of our current monetary system has led to exploitation of the 99% by the 1%, this page will set out to explain the mechanics of digital currencies in the simplest terms possible.

A general idea is the mathematical expression of a one-way street, which means that the result of a calculation can be published safely; even if the exact algorithm is known, it is not feasible (today) to reverse engineer the components (secrets) which were used as input to derive the output. This concept is found in both fingerprinting (hashes, or checksums) and public key algorithms.

The metaphor is "Alice" forging both a lock and a key in such a way that the lock does not reveal the shape of the key. She may then use a fingerprint (hash) of the lock (pubkey) as marker or address and submit this address to nodes who agree if it is a valid type. Once included in the big "book" (blockchain), "Bob" may propose to add value to the address. To withdraw, however, or subtract from the address Alices' (secret) key is needed. She "owns" the address. Note that the making of the address takes place off-chain, and even off-line, at the home of Alice (with a slow home computer) and Alice does not depend in any way on other more powerful entities to make use of the blockchain at this stage.

As a general rule mining refers to increasing the miner's account in exchange for up-time, i.e. contribution to the whole network. To encourage up-time, mining is made as slow as possible - but also wasting CPU cycles while solving tricky mathematical problems. Other incentives for up-time include fees ("gas"). Higher transaction fees encourages faster execution. Fees are nevertheless voluntary (in theory).

Cryptocurrencies other than CBDC don't generally have a central issuing or regulating authority, instead using a decentralized system, e.g. a p2p network to store the blockchain. However, there are many varieties that are centralized - with the promise to be "decentralized" later, but controlled by a single authority.

As mentioned above the average user does not want to (Moxie), or is not able to, run a server (node) 24/7. But does that mean, that there is demand for centralization and platformization? 99 percent of hits returned by any search engine suggests that there is no other possibility. For example, many results give the impression that owning an address with a secret key ("having a wallet") requires running a certain piece of software. This is false.

The secret key is all that is needed to manage funds and it may well be written on a piece of paper ("paper wallet"). It can be created off-line and off-chain, without any third party needed. Equally a transaction does not require parties to be online[citation needed]. It can be performed on paper and handed in later. 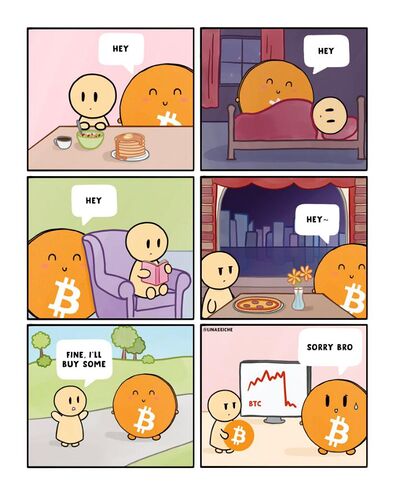 The power to abuse such a relative simple accounting system comes with:

Skript is used to increase privacy and usability in the Lightening network and in atomic swap contracts. If abused, smart contracts may be disastrous.

Quotes from WP and Bloomberg

China banned cryptocurrencies in 2021, while introducing its own CBDC at the same time.[citation needed] The WEF surmised cryptocurrencies were facilitating capital flight from China's markets, bypassing conventional restrictions.[4] The ban did not affect the infamous Tether-Bitcoin Pump-and-Dump scheme.

The EU Committee on Economic and Monetary Affairs and the Committee on Civil Liberties, Justice and Home Affairs suggests in rather cryptic words[5] more crypto surveillance, in which any transaction to or from "unhosted wallets" must get KYC'd. "Brian Armstrong, Coinbase CEO, in a hypocritical statement raised concerns about what impacts this can have on EU user's privacy and security, just after Coinbase started requiring name and home addresses of all Canadian transaction's recipients."[6]