Ed Balls is a British Labour Party and Co-operative Party politician who was the Member of Parliament (MP) for Morley and Outwood and Shadow Chancellor of the Exchequer until the May 2015 General Election when he was defeated by the Conservative candidate Andrea Jenkyns.[1][2]

Married to Blairite Labour MP Yvette Cooper, Ed Balls was initially rumoured to be seeking another seat that would enable him to return to Parliament. Later in 2015, he supported his wife's unsuccessful bid to become Leader of the Labour Party.[3]

In the 2016 leadership campaign, Ed Balls declared his support for former political lobbyist for Pfizer, Owen Smith, against the "leftist utopian fantasy" of Jeremy Corbyn.[4] 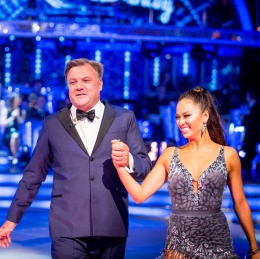 "Ed Balls, 50 next birthday, has more chance of being the next Prime Minister than he has of winning Strictly.

"But I wish him well because Ed carries the hopes of all us dad dancers, all the half-cut geezers who ever took to a dance floor with wedding cake smeared down their shirt, all the disco dancing fools who ever practised Michael Jackson’s Moonwalk with just their bedroom mirror for a partner.

"We can dream of dancing on Strictly. And leave Ed to live the nightmare."[6]

In October 2016, Ed Balls had reportedly foxtrotted onto the short list of Labour candidates who were competing to stand at the 2016 Richmond Park by-election, caused by the resignation of Tory Zac Goldsmith.[7] On 5 November 2016 journalist, author, and railway historian Christian Wolmar was formally selected as the Labour candidate.[8]

While he was chief economic adviser to the Treasury, Balls attended the Bilderberg annual conference of politicians, financiers and businessmen in 2001 and 2003, and returned to the United Kingdom on Conrad Black's private jet on both occasions. In 2010 after details were reported in the press, Balls commented:

"It saved the taxpayer the cost of a plane fare and on both occasions I declared it at the time to the permanent secretary in the normal way."[9][10]

Ed Balls is currently a Senior Fellow at Harvard University Kennedy School’s Mossavar-Rahmani Center for Business and Government, and a Visiting Professor to the Policy Institute at King's College London. He was appointed chairman of Norwich City F.C. in December 2015.[11]