Christian Wolmar (born 3 August 1949) is a British journalist, author, and railway historian of Swedish and Russian descent.[1] He is best known for his books and commentary on transport, especially as a pundit on Britain's railway industry, and was named Transport Journalist of the Year in the National Transport Awards in 2007. He is also an advocate for cycling as a means of transport.

On 5 November 2016, Christian Wolmar was selected as the Labour Party candidate to contest the 2016 Richmond Park by-election following the resignation of Tory Zac Goldsmith.[2] Wolmar said:

"It's a great honour to be selected to stand for Labour in the Richmond Park by-election which gives us an opportunity to expose the disastrous policies of this government and fight the third runway at Heathrow which I have long opposed.

"The Liberal Democrats and Zac Goldsmith supported every terrible decision taken by the last coalition government, from austerity to the unnecessary and expensive top-down reorganisation and creeping privatisation of the NHS. The Lib Dems are not a progressive alternative, but Labour is.

Zac Goldsmith played a key role in the Leave campaign which led to the decision to take us out of the EU - a decision that 72% of voters here opposed. The only way to send a message to this government and that we do not accept what they are doing to our country is to vote Labour."[3][4]

Christian Wolmar, who lives in Jeremy Corbyn’s Islington North constituency, backed him for the Labour leadership in 2015, but then had such serious doubts about the way Corbyn was running the party that he supported Owen Smith’s challenge over the summer. Following Jeremy Corbyn's reelection with an overwhelming majority, Wolmar said:

“I now totally support Jeremy; we have got to all get together.”[5]

On 1 December 2016, Lib Dem Sarah Olney defeated Goldsmith in the by-election. Wolmar came third with 1,515 votes, and lost his deposit.[7]

After graduating from Warwick University in 1971, Christian Wolmar worked for Marketing, Retail Newsagent, the New Statesman, and the London Daily News. He was formerly on the staff of The Independent (1989–97) and their transport correspondent for four years from 1992, covering the privatisation of British Rail by the Major government. He also contributed to The Observer.

Wolmar's books and columns analyse the current state of the British railway industry. He has become known as one of the most vociferous media critics of rail privatisation, on grounds which include the upheaval following the Hatfield train crash, the current structure of the industry, and the cost to taxpayers.

He continues to produce regular columns for RAIL magazine and several other magazines.[8]

Wolmar is a frequent speaker and moderator at conferences including events in Australia, South Korea, America, Russia and numerous European countries.

He is known to be against the construction of HS2, a planned high-speed railway between London and Birmingham and further points north.[9][10]

Sir, Bad government begets bad government. Ironically it was David Cameron’s fatal decision to hold a referendum that has now forced the government to show “Britain is open for business” by agreeing to expand Heathrow irrespective of the financial cost, which makes the scheme unviable, and the environmental damage, which makes it unethical.

The proclaimed advantages of Heathrow over Gatwick are marginal — a bit of convenience for a few transit passengers that could easily be sorted by allocating regions of the world between the two airports. The fact that easyJet is to be the biggest new customer at Heathrow belies the notion that expansion is about being “open for business”, as does the envisaged expansion in domestic flights, sucking the lifeblood from regional airports. Point to point, not hub and spoke, is the future.

Moreover, despite the UK and Chinese governments recently agreeing to double the number of flights allowed to operate between the two countries, BA has just announced it is cutting flights to Chengdu — just the sort of destination that the third runway is supposed to serve.

The more fundamental, and unanswered, question is: if passengers had to pay for the full environmental damage wreaked by aviation, would there be any need for expansion at all? A start could be made by taxing aviation fuel, immediately relieving the pressure on airport capacity.[11] 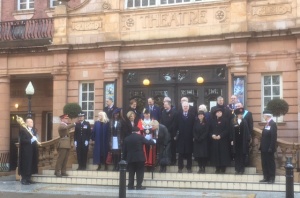 I was humbled to be invited to mark Remembrance Day in Richmond. It was a moving occasion highlighted, perhaps, by the election of Donald Trump which seems to have made the world a more dangerous place and increased the likelihood of war. All three main candidates were there and we marked the occasion together.

Looking at the huge number of names inscribed into the Richmond War memorial just below the Old Town Hall brings to life the fact that wars are so costly in every way. Not only do they use up vast amount of resources that could be spent in far more useful ways, but they bring tragedy and misery to thousands of families.

My father, born in Russia, actually fought as a Lieutenant in the First World War on the Eastern front against the Austrians. I doubt, really, if he covered himself in much glory. He told me once how he wandered into a forest to relieve himself only to suddenly find a burning sensation in the abdomen. He ripped open his shirt only to find that a nearly spent bullet had penetrated his clothing and the heat had burnt his skin. If that bullet had been fired from just a bit closer, I would not be here to write this today.

After a few months in charge of three guns, he was forced to flee, in the early days of the 1917 Revolution, when one night his sergeant came into his tent and said "Boris Semenovich, I advise you to leave as tomorrow the men are going to rebel against the officers and as you have treated us well, it would be better if you go to ensure your safety." My father consequently fled and managed to survive the rest of the war in difficult circumstances, eventually fleeing to France in 1919.

I thought of him as I stood in silence, thinking that he may not have been a hero, but he did his bit and served his country as best he could, just like millions of others. It was, therefore, a day of reflection and a realisation that we must learn from the past, avoiding conflict wherever possible.[12]

All have attracted many favourable reviews.

He has also written a book on the abuse scandals in children's homes, Forgotten Children, published in 2000, and has written extensively about housing issues and local government.

In September 2012, Wolmar announced his intention to seek nomination for the Labour Party candidacy at the 2016 London mayoral election.[13] The WolmarforLondon campaign launched in Brighton in 2013 with Wolmar chairing a panel on "One London" with Nick Raynsford, MP for Greenwich and Woolwich and former Housing Minister, Simon Birkett, Founder and Director of Clean Air in London, Vidhya Alakeson, Deputy Director of the Resolution foundation and Cllr Lise Thorsen, Lead Cllr on Sustainability on Copenhagen City Council.

He held a second conference in June 2014, at The Exchange. Speakers included Neal Lawson, Chair of Compass and Professor Tony Travers LSE. Later he took part in the Labour Party Mayoral hustings at Manchester in September 2014 and unveiled plans to pedestrianise Oxford St with boosts to business and the environment.

Described in the Guardian as "the most extensive grass roots campaign",[14] one poll put Wolmar in second place,[15] with policies called Lifeblood for London, Putting a Roof over our Heads, Caring for the Capital's Well-Being and Hungry for Change.

In June 2015, after cycling over 2,000 miles and speaking at over 100 events, Wolmar won six Constituency Labour Party nominations, and went through to the final shortlist.[16] Described by the Londonist as "the non-politician who wants to be mayor",[17] Wolmar spoke at the five official hustings about his campaign vision for a more affordable, liveable and sustainable London.[18]

He received just over 5% of the total votes and was defeated by Sadiq Khan. Following Khan's successful election as Mayor of London in May 2016, Wolmar announced his intention to run for the Labour candidacy in Khan's vacated parliamentary seat of Tooting in the subsequent by-election; however, he was not shortlisted to the selection meeting to decide the candidate.[19]

Wolmar is a keen cricketer and distance runner, and plays tennis. He is a diehard football fan, having supported Queens Park Rangers for over 50 years.

This page imported content from Wikipedia on 6 November 2016.
Wikipedia is not affiliated with Wikispooks.   Original page source here
Retrieved from "https://wikispooks.com/w/index.php?title=Christian_Wolmar&oldid=229762"
Categories: