The University of Melbourne is a public research university located in Melbourne, Australia. Founded in 1853, it is Australia's second oldest university and the oldest in Victoria.[1] Its main campus is located in Parkville, an inner suburb north of Melbourne's central business district, with several other campuses located across Victoria.

Incorporated by the Victoria Colony, the University of Melbourne is one of Australia's six sandstone universities and a member of the Group of Eight, Universitas 21, Washington University's McDonnell International Scholars Academy,[2] and the Association of Pacific Rim Universities. Since 1872 various residential colleges have become affiliated with the university, offering accommodation for students and faculty, and academic, sporting and cultural programs. There are ten colleges located on the main campus and in nearby suburbs. 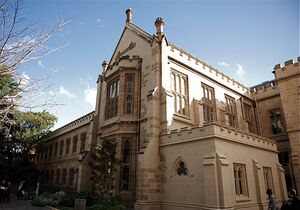 Old Quad, the original building of the University of Melbourne

Foundations of the university 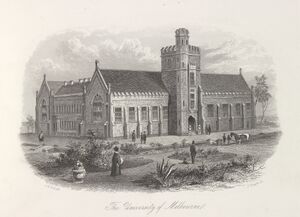 The University of Melbourne was established following a proposal by Hugh Childers, the Auditor-General and Finance Minister, in his first Budget Speech on 4 November 1852, who set aside a sum of £10,000 for the establishment of a university.[6] The university was established by Act of Incorporation on 22 January 1853, with power to confer degrees in arts, medicine, laws and music. The act provided for an annual endowment of £9,000, while a special grant of £20,000 was made for buildings that year.[7] The foundation stone was laid on 3 July 1854, and on the same day the foundation stone for the State Library[8] Classes commenced in 1855 with three professors and sixteen students; of this body of students only four graduated. The original buildings were officially opened by the Lieutenant Governor of the Colony of Victoria, Sir Charles Hotham, on 3 October 1855.

A law school was established in 1857 at the Parkville campus, following which a Faculty of Engineering and School of Medicine were established in 1861 and 1862 respectively. The university's residential colleges were first opened on the northern aspect of the campus in 1872, divided between the four main Christian denominations.[9]

The first chancellor, Redmond Barry (later Sir Redmond), held the position until his death in 1880. The inauguration of the university was made possible by the wealth resulting from Victoria's gold rush. The institution was designed to be a "civilising influence" at a time of rapid settlement and commercial growth. In 1881, the admission of women was a seen as victory over the more conservative ruling council. Julia 'Bella' Guerin graduated with a Bachelor of Arts in 1883, and became the first woman to graduate from an Australian University. 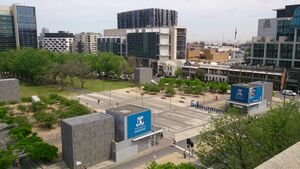 The view of the Melbourne Law School, Business and Economics, The Spot and Alan Gilbert Building.

Early in the 1900s the university expanded its offerings to more utilitarian courses. In 1901 the number of students enrolled at the University of Melbourne exceeded 500 students for the first time. The university established the Diploma of Education in 1903, following negotiations with the Victorian Education Department. Despite the economic depression of the 1890s and the discovery of a significant fraud by a university registrar in 1901, the university continued to expand during this period. This growth included the construction of several buildings between 1900 and 1906. Such growth was facilitated largely through an increased government funding allocation, and the coinciding university led funding campaign. To accompany the training dentists received by the Melbourne Dental Hospital, a School of Dentistry was established to teach the scientific basis of dentistry at the university. Agriculture was established in 1911 following the appointment of the State Director of Agriculture as the first professor. During this period the university became a notable site for research, emerging as a leader in Australia. Following World War II the demand for higher education increased rapidly, and as a result became a transformative period for the university.[10] Expansion of the university increased significantly during the 1980s and 1990s, as the university amalgamated with a number of tertiary colleges. In 1988 the Melbourne Teachers' College was brought into the Faculty of Education, and the amalgamation lead to the formation of a distinctly new Faculty of Education. The College of Advanced Education was incorporated into the university in 1989. During this period, more students than ever had before attended the university. The university had expanded its student population to beyond 35,000 students. Such amalgamations continued into the 1990s, with the Victorian College of the Arts affiliation with the University of Melbourne in 1992. This grew the number of campuses for the University of Melbourne, which would now include a new St Kilda Road location.

In 2001, the Melbourne School of Population Health was established, the first of its kind in Australia, and continued the growth of the university. Work at the centre involved contributions from many disciplines, ranging from the social sciences to epidemiology. Health fields such as Indigenous, women's, mental, sexual, and rural health have all been researched at the centre. A significant change in curriculum was established in 2008. The newly created model for education was developed, known at the university as The Melbourne Model. In this curriculum model, students firstly undertake a general bachelor's degree before specialising in either a professional or research graduate course.

The Melbourne School of Land and Environment was disestablished on 1 January 2015. Its agriculture and food systems department moved alongside veterinary science to form the Faculty of Veterinary and Agricultural Sciences, while other areas of study, including horticulture, forestry, geography and resource management, moved to the Faculty of Science in two new departments.

In 2020, on-campus teaching was limited to selected clinical placements as a result of social distancing restrictions imposed by the Victorian State Government in response to the COVID-19 pandemic. The majority of teaching was moved to online delivery during the first semester.[13] Like many other institutions and workplaces, university faculty members elected to use Zoom Video Communications to conduct live tutorials online. Autumn at the university grounds

Justices of the High Court of Australia

Chief Justice of the Federal Court of Australia

Justices of the Federal Court of Australia

Chief Justice of the Family Court of Australia

Justices of the Supreme Court of Victoria

Presidents of the Victorian Court of Appeal