Robert Maxwell was a Czechoslovak war orphan who became a billionaire, British politician and media mogul. He was known to be a friend of Israel in his lifetime, but contacts with the Mossad remain largely unexplored until his death. His daughter, Ghislaine Maxwell, worked closely with Jeffrey Epstein and after 2019 was had increasingly exposed connections to the Mossad.[1] 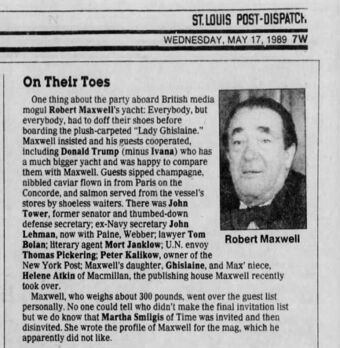 On 5 November 1991, he was last in contact with the crew of the Lady Ghislaine, his yacht, at 4:25 am local time, but was found to be missing later in the morning.[4] Maxwell was presumed to have fallen overboard from the vessel which was cruising off the Canary Islands,[4][5] and his naked body was subsequently recovered from the Atlantic Ocean.[6] The official ruling at a Madrid inquest held in December 1991 was death by a heart attack combined with accidental drowning,[7] although three pathologists had been unable to agree on the cause of his death at the inquest;[6] he had been found to have been suffering from serious heart and lung conditions.[8]The judge ruled out murder.[7]

“Maxwell was a passionate friend of Israel, and we are sorry about this heavy tragedy” said Israeli Prime Minister Yitzhak Shamir at his funeral [9] and: “He has done more for Israel than can today be said”.[10]