The Iran–Iraq War was a protracted armed conflict that began on 22 September 1980 when Iraq invaded neighbouring Iran. The war lasted almost eight years, ending in a stalemate on 20 August 1988 when Iran accepted a UN-brokered ceasefire.

When in 1980 Saddam Hussein decided to stage a war against Iran, Iraq per se did not have the political will and military might required to launch an attack on the Iranian soil. It was actually the CIA and the Reagan administration [1] who encouraged Iraq to undertake an anti-Iranian offensive from 1980 to 1988. 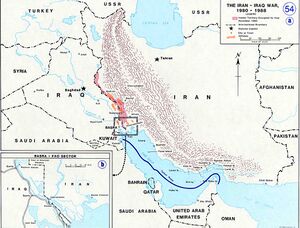 After the Carter administration's operation Eagle Claw, the CIA staged a failed coup with the help of Saddam and the remnants of the old Iranian government who sought refuge in Iraq with Saddam[2]. This coup, known as Nojeh ou Nuzhih, struck a heavy blow to Iranian armed forces as several high ranking officials, who were complicit in this coup, were executed for treason[3]. Saddam was even being counseled by Shah’s generals in estimating the Iranian armed forces and their defensive powers, which they evaluated to be meager because of the social upheaval and restructuring brought on by the revolution and US-backed sanctions.[4]

20 things the U.S. did to help Saddam against Iran

The Iranian historian Fatemeh Mohammadi made a brief outline[5] on twenty different types of help Saddam received from the United States in his war against Iran: 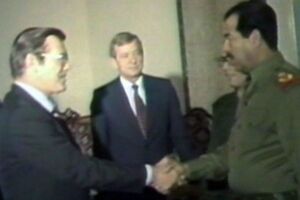 An interesting fact is that the same Ronald Rumsfeld who took a hawkish attitude toward Iraq and favored an attack post 9/11, was the person who went to Baghdad as Reagan’s emissary for a handshake with Saddam. This move was taken in December 1983 and again in March 1984 because the “Reagan administration was afraid Iraq might actually lose” the war to Iran, according to US ambassador Peter W. Galbraith[6].

C) US direct attack on Iran while in war with Saddam

19. US spied on Iran with aircraft during operation Eager Glacier and delivered this information to Iraq; 1987-88.