The New York Times is a long established and respected newspaper with "a venerable history of eliding references to any US role in overthrowing governments or murdering foreign leaders."[1]

In 1976, the New York Times unearthed CIA record #104-10406-10110 (Countering Criticism of the Warren Report), which revealed how the CIA weaponised the phrase "conspiracy theorist" as a way of trying to undermine criticism of the JFK Assassination Official narrative that the JFK hit was the act of a "lone nut".[3]

One exception to the control of corporate media may have been a cover page article in the New York Times about the Franklin child prostitution on its coverpage, which names Bush and Reagan in its headline. This may however have been a modified limited hangout or other such form of misdirection.

“The truth is hard to find. The truth is hard to know. The truth is more important than ever,” reads a television ad for The New York Times. What the paper fails to add is that the hardest place to find the truth about the forces affecting the life of the average American and the truth about empire is in the Times itself. News organizations, from the [NYT] to the tawdry forms of entertainment masquerading as news on television, have rendered most people and their concerns invisible.”
Chris Hedges [4] 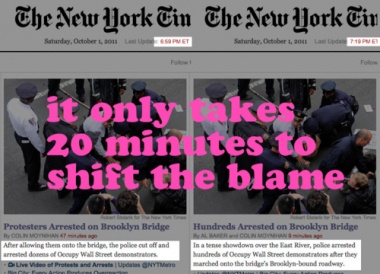 The New York Times was quick to dismiss the business plot, which it did with an editorial characterizing it as a "gigantic hoax" and a "bald and unconvincing narrative."[5][6]

The York Times "led the propaganda behind 9/11 and the 9/11 Wars. It did so by ignoring many of the most relevant facts, by promoting false official accounts, and by belittling those who questioned the 9/11 events." The paper has never reported any critical analysis of the official narrative up to 2015.[7]

On September 17, the NYT published AFTER THE ATTACKS: THE COVERAGE; Some Flawed Information Occasionally Creeps In which disavowed earlier reporting, such as about the George Washington Bridge plot.[8]

The New York Times had removed their reporting of the 2016 Hurriyah car bombing hoax by 11 December 2017.[9]

Bronner added, "I think the Palestinians are going to have a fairly big case. I for example live in West Jerusalem. My entire neighborhood was Palestinian before 1948."[10]