Penny Sue Pritzker (born May 2, 1959) is an Jewish American billionaire businesswoman [1] who is currently serving as the 38th United States Secretary of Commerce. She is the founder of PSP Capital Partners and Pritzker Realty Group.[2] She is also co-founder of Artemis Real Estate Partners.[3] She is a member of the Pritzker family. 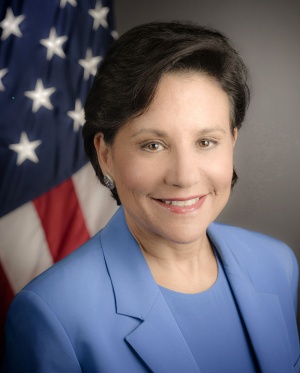 +
Has image2
File:Penny Pritzker.jpg +
Has nationality
USA +
Has noRatings
0 +
Has objectClass
Person +
Has objectClass2
Person +
Has posting
United States Secretary of Commerce +
Has religion
Jew +
Has revisionSize
2,030 +
Has revisionUser
Peter +
Has spouse
Bryan Traubert +
Has website
http://www.penny-pritzker.com/ +
Has wikipediaPage
https://en.wikipedia.org/w/index.php?title=Penny Pritzker +
Has wikipediaPage2
https://en.wikipedia.org/w/index.php?title=Penny_Pritzker +
Is not stub
true +
Has subobject"Has subobject" is a predefined property representing a container construct and is provided by Semantic MediaWiki.
Penny Pritzker +