ITV is the main rival of the BBC. The main difference between the two is that ITV has ad breaks during broadcasting hours.

The acronym used to stand for independent television. Nowadays it is anything but independent.

Comparison with the BBC

ITV is not directly funded by the UK taxpayer unlike the BBC. The BBC is funded publicly through a TV license.

As the BBC is funded by the license fee, their programming is not interrupted by commercial breaks. A one hour programme on the BBC generally has a seamless (no breaks) total run time of 59 minutes.

In December 2021, the GMB twitter account deleted a poll which showed a vast majority of respondents opposed mandatory Covid-19 vaccination. [1] 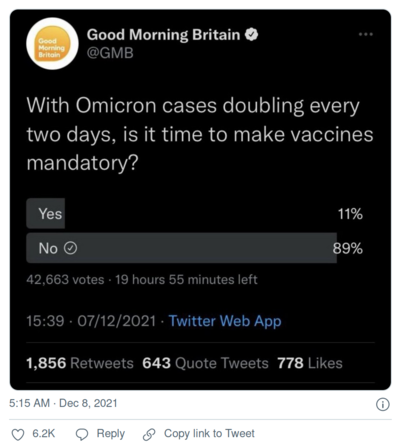 The Twitter opinion poll on mandating jabs for COVID-19.

Not much outside the status quo.

Nowadays, the I in ITV stands for identity politics