The October surprise was a deal worked out by during the 1980 US Presidential election between the team of Ronald Reagan and the Iranians to prevent the successful resolution to the Iran hostage crisis just before the 1980 election which would have gived Jimmy Carter an electoral boost. Although the timing of the event was obviously suggestive (the hostages were released just minutes after Reagan was inaugurated) and independent have journalists discovered supporting evidence, the claim was investigated by the House October Surprise Task Force which declared it unproven.

In November 1991, both Newsweek and The New Republic published matching stories on their covers, claiming to have debunked the October Surprise allegations. They stated that Casey could not have made the trip to Madrid in 1980, since he was booked in London for a morning session of a conference on July 28, so he could have made a side trip to Madrid. However, Consortium News claimed in 2013 that "the magazines had failed to do the necessary follow-up interviews, which would have revealed that Casey was not at the morning session on July 28. He didn’t arrive until that afternoon, leaving the “window” open for Hashemi’s account."[1]

In March 1992 the House October Surprise Task Force was convened, supposedly to investigate the truth of this theory. Following the publication of its final report in January 1993, the Task Force chairman Rep. Lee H. Hamilton published an editorial in The New York Times summarising the Task Force conclusion that "there was virtually no credible evidence to support the accusations."[2] 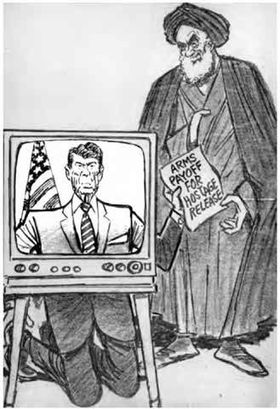 Evidence has continued to mount that the so-called "theory" is in fact correct. Suspicious deaths of people investigating the story and some of those who may have had key evidence have prompted others to go on the record and testify that there was, in fact, a conspiracy. Even Wikipedia acknowledges this (though the page title steadfastly categorises it as a 'conspiracy theory'), and contains a bunch of interesting material.

Enquiry chair, Lee H. Hamilton, appears to have been chosen as a safe pair of hands to settle an official narrative - he has a history of such. However, in 2013, Hamilton was emailed about File:2007-0491-F,Folder1,Part5-b(dragged).pdf which revealed that in 1991 a deputy White House counsel working for then-President George H. W. Bush was notified by the State Department that Reagan’s campaign director William Casey had taken a trip to Madrid, something that was concealed from the House October Surprise Task Force. In the face of such evidence, even Hamilton admits to having "second thoughts".[3]

Former CIA pilot John Lear, told a pilots' group in 2004 how he made a covert flight of arms to Iran as a payment part of the exchange, making it effectively a precursor to the Iran-Contra affair:

"George H. W. Bush was flown in a BAC 111 one Saturday night to Paris to meet with the Ayatollah Khomeini. Bush offered... Khomeini a deal whereby if he would delay the release of the hostages held in Tehran until Reagan’s inauguration, the administration would supply unlimited guns and ammunition to the Iranians. In order to get Bush back for a Sunday morning brunch so that nobody would be alerted to his absence he was flown back in an SR-71 from Reims field near Paris to McGuire AFB. Of course Reagan won, the hostages were released and one of my jobs in Cairo was to deliver those arms from Tel Aviv to Tehran. Unfortunately, the first airplane in, an Argentinean CL-44 was shot down by the Russians just south of Yerevan and Mossad who was running the operation didn't want to risk sending my 707. The arms [were] eventually delivered through Dubai, across the Persian Gulf and directly into Tehran."[4]

Oswald LeWinter claimed to have provided security during a meeting in Paris that involved William Casey, soon to become CIA director, George H. W. Bush and CIA official Donald Gregg. However, he later claimed his testimony "had been a complete fabrication."[5]

Lance deHaven-Smith wrote in 2010 that "given what is now known about Iran-Contra, it appears likely that the Iran-Contra operation grew out of the October Surprise agreement".[6]

As of 2019, Wikipedia continues to refer to it as a "conspiracy theory" only.

The Camarate air crash in December 1980 appears to have been an assassination of the Portuguese Defence Minister, Adelino Amaro da Costa, who had said that he had documents concerning the October surprise and was planning on taking them to the United Nations General Assembly. In 2013 José Esteves told the Portuguese parliamentary X Commission that Frank Sturgis (of Operation 40) had paid him $200,000 to create the firebomb that was used in the crash.[7]

In 1991, freelance writer Danny Casolaro (among others)[8] claimed to be almost ready to expose the October surprise conspiracy, when he suddenly suffered a violent and premature death.