Lee H. Hamilton is a US deep state actor with a speciality of covering-up. He was elected to the US House of Representatives as part of the national Democratic landslide of 1964. He remained in Congress until 1999; at the time he was one of two surviving members of the large Democratic freshman class of 1965 (the other being John Conyers). He "played key roles in covering up two of [the] inter-connected scandals, October Surprise and Iran-Contra"[1] as well as 9-11. 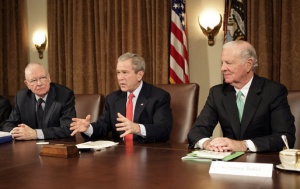 He chaired many committees during his tenure in office, including the House Committee on Foreign Affairs, the U.S. House Permanent Select Committee on Intelligence, the Joint Committee on Printing and others.

As chairman of the House Select Committee to Investigate Covert Arms Transactions with Iran (1987), Hamilton chose not to investigate President Ronald Reagan or President George H. W. Bush, stating that he did not think it would be "good for the country" to put the public through another impeachment trial.

During the 1980 US presidential election the campaign of Ronald Reagan sought to negotiate a solution to the Iran hostage crisis in competition to the US government of Jimmy Carter in order to prevent the successful resolution of the crisis giving Jimmy Carter an electoral boost. After years of investigation, reporters were close to proving this conspiracy. As a response, in 1992 the deep state set up a United States House of Representatives task force to settle upon an official narrative and take the wind out of the investigators' sails. Hamilton was chosen to chair the House October Surprise Task Force. In 2013, after new evidence continued to surface, he claimed that he was having "second thoughts" about his claim that "there was virtually no credible evidence to support the accusations."[2]

Lee Hamilton was the ranking democratic member on the Select Subcommittee to Investigate the United States Role in Iranian Arms Transfers to Croatia and Bosnia (the "Iranian Green Light Subcommittee"), which published its report in 1997.[3]

Hamilton was vice chairman of the 9/11 Commission after the resignation of the initial chair and vice chair.

A Quote by Lee H. Hamilton