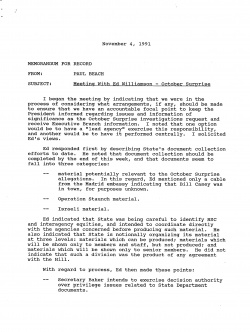 I began the meeting by indicating that we were in the
process of considering what arrangements, if any, should be made
to ensure that we have an accountable focal point to keep the
President informed regarding issues and information of
significance as the October Surprise investigations request and
receive Executive Branch information. I noted that one option
would be to have a "lead agency" exercise this responsibility,
and another would be to have it performed centrally. I solicited
Ed's Views.

— material potentially relevant to the October Surprise
allegations. In this regard, Ed mentioned only a cable
from the Madrid embassy indicating that Bill Casey was
in town, for purposes unknown.
— Operation staunch material.
— Israeli material.

Ed indicated that State was being careful to identify NSC
and interagency equities, and intended to coordinate directly
with the agencies concerned before producing such material. He
also indicated that State is notionally organizing its material
at three levels: materials which can be produced; materials which
will be shown only to members and staff, but not produced; and
materials which will be shown only to senior members. He did not
indicate that such a division was the product of any agreement
with the Hill.

With regard to process, Ed then made these points: