The 1983 Bilderberg Meeting was the 31st such meeting and had participants from 18 European countries, the United States, Canada and "various international organizations".[1] It was held at Château Montebello, Quebec, Canada. The 112 guests included 27 business executives, 27 politicians, 4 financiers, 8 editors/journalists and 7 academics.

The 1983 Bilderberg Conference Report was prepared by rapporteurs Charles Getchell and Grant F. Winthrop. It has been leaked and is now online. There were three topics.[1]

The panelists were Seweryn Bialer (who wrote a working paper on The Soviet Union And The West In The 1980's: Containment, Detente Or Confrontation), Henry A. Kissinger, Helmut Schmidt and (for part of the session) Pierre Elliott Trudeau. The chairman was Walter Scheel.

2. Issues in Medium-Term Prospects for Growth in the World Economy

A. Protectionism And Employment

B. Risks In Banking And Finance

The first working paper was prepared by Alexandre Lamfalussy, entitled The Western Banking System and the International Debt Situation: Facts, History, Prospects and Issues. The second, by Hans H. Angermueller, was entitled International Banking Problems And Medium-Term Growth Prospects. The third panelist was Paul A. Volcker and the discussion was chaired by Willem F. Duisenberg.

The discussion covered America's relations with its allies, arms control negotiations and weapons programs, economic affairs, and policies in the Middle East and Central America. 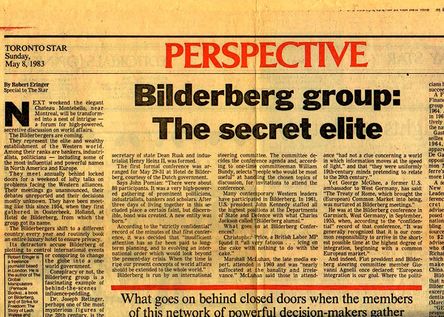 On May 8, 1983, the Toronto Star published a report by Robert Eringer entitled 'Bilderberg group: The secret elite'.