Charles Courtney-Clarke is a Namibian fisheries economist and political activist who was closely involved in the transition to independence from apartheid South African rule of South West Africa (Namibia) in March 1990.[1]

Charles Courtney-Clarke was an associate of Anton Lubowski, secretary-general of South West Africa People's Organisation, who was assassinated in Windhoek by South Africa's Civil Cooperation Bureau on 12 September 1989 (when Namibia was under the control of the United Nations Transition Assistance Group).[2]

The Lubowski murder trial that took in April 1990 - one month after Namibia achieved its independence - proved inconclusive and, in January 2014, Charles Courtney-Clarke applied to the United Nations to have the proceedings reopened.[3] 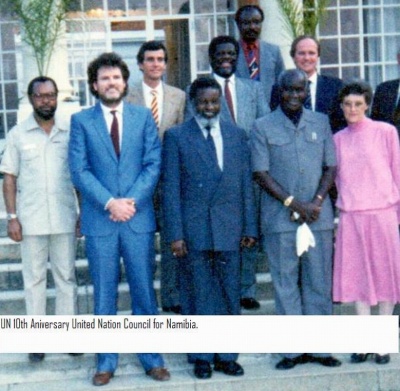 The shuffling by the police and the Prosecutor-General Hans Heyman in the handling of the murder case was reason for Justice A.J. Mohamed at the 1st inquest into Lubowski’s murder to raise a reminder in the course of his judgment that:

"the murder of Adv Lubowski is a matter of very fundamental public importance. ..... His cold-blooded murder is a very serious matter. ..... The vigorous prosecution of whoever might have been responsible for this deed is clearly..... crucial to the administration and the image of Justice in Namibia. That image and that interest might prejudicially be impaired if there ever follows a perception in the public (legitimate or otherwise), that justice was defeated by procedural complexities, by legal stratagems, by tactical manoeuvres or by any improper collusion. The general community of Namibia must be able to feel that every permissible avenue to pursue the prosecution of whoever might be the killer of Mr Lubowski was followed."

The affairs of state, police, prosecution and judiciary, are so deeply manipulated by the key economic beneficiaries to the wealth of the nation - inclusive of South Africa, England and the USA - that they've now got the masses bringing down their governments - very much to their advantage to advance the creation of their "Corporate Feudal System" - my term. Be on the right side!!!

Application to the United Nations 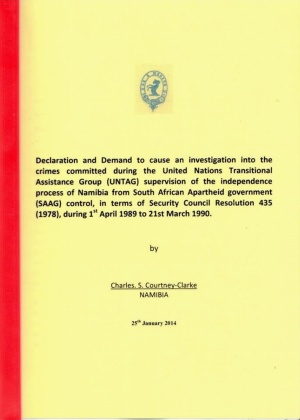 In October 2014, Charles Courtney-Clarke created a public private forum "establishing an economic equilibrium between the key financial beneficiaries to the wealth of the country and the government". The website recorded that an application was submitted to the United Nations Security Council (UNSC) and to the International Criminal Court (ICC) to compel the investigation into the unsolved crimes against humanity committed by the South African Apartheid Government during the Namibian independence process supervised by the United Nations Transition Assistance Group (UNTAG), between April 1989 to March 1990, in terms of UN Security Council Resolution 435 (1978).

Declaration and Demand, dated 25th January 2014, is submitted to the United Nations to investigate the crimes mentioned below, after having exhausted local legal remedies to have them investigated and the planners/perpetrators prosecuted in South Africa and Namibia are:

1) Bombing of the UN office in Outjo, Namibia.
2) The capture and escape of the perpetrators of the bombing.
3) The murder of Adv Anton Lubowski.

In the interim a public request to the UN to determine the existence and integrity of the police dockets of these crimes in the custody of the local Namibian authorities.
As a result of the failure of the respective authorities to act and dispense justice in Namibia, South Africa and Her Majesty’s Government in the United Kingdom, this website will serve to communicate the on-going demands to International Institutions and governments to dispense Social and Economic Justice.[4]

On 27 May 2015, Charles Courtney-Clarke posed the following question for Laurie Flynn:

Was the "disappearing diamonds" case, based on the Thirion Commission of Inquiry 1985, ever quantified in his book or elsewhere?

And, more importantly, I would like to know whether Flynn has the full copy of the British police investigator's report into the diamond case against Gordon Brown (State vs Cohen van Zyl and G. Brown CC21/94 RC95/941996). The Scottish Sunday Times (Michael Gillard) reported Brown's jail-term ordeal with De Beers manipulation of the Namibian justice system that Brown escaped from. The news report triggered De Beers "white collar" gangsters to come down on the Sunday Times, they were forced to verify the truth about Brown's ordeal and thus the police investigator was sent to Namibia in 1996. Brown contributed key evidence that initiated the Thirion Commission of Inquiry - discovered a quantum of damages and theft running into billions of dollars. There is a catalogue of evidence from Namibia on the links and modus operandi of the "Key Financial Beneficiary" to the wealth of Namibia weighing in on the Lockerbie plane crash that killed UN Commissioner for Namibia Bernt Carlsson in 1988.[5]

In February 2007, Namibian human rights activist Phil ya Nangoloh reported that former President Sam Nujoma has long term links with South African intelligence and the CIA dating as far back as March 1960, when he travelled to Congo-Kinshasa’s Katanga Province and met its leader Moise Tshombe:[6]

On pages 277 to 279 of his book "Where Others Wavered", Nujoma wrote “unhindered and continued access to raw minerals, strategic minerals and sea lanes” had motivated US policy towards Namibia in the 1970s and 1980s. On page 257 Nujoma credits his close friend, Dr Henry Kissinger, for having “raised our profile among the few countries that objected to our being sole and authentic representative of the people of Namibia”;

On 6 March 2007, in his Internet article entitled "Eliminating Political Opponents", Namibian writer Charles Courtney-Clarke says that Nujoma's confidant and economic adviser Maurice Tempelsman “arrived in Namibia in 1989 to ensure the control of the new Namibian government and De Beers' control of its diamonds”. Evidence reveals that Tempelsman, whose role in the confluence of public policy and private profit as a middleman for the De Beers diamond cartel, helped to shape practically every major covert CIA action in Africa since the early 1950s;

In Phil ya Nangoloh's view, Nujoma's CIA links explain why and how Namibia’s mineral resources remain under the control of Big Business, such as Anglo-American Corporation, Rio Tinto Group and Lonrho.[7]

In May 2015, Charles Courtney-Clarke responded to these allegations:

"Namibian human rights activist Phil ya Nangoloh has a political agenda. His activities prior to independence of Namibia in 1990 and thereafter are partial to particular crimes in the human rights spectrum and anti-SWAPO. All political leaders are communicating with intelligence entities. The prime task of spies is to infiltrate leaders’ space. So what’s the big deal?
"The extent to which the CIA infiltrated SWAPO is directed entirely by the vested interests to the wealth of the country. The manipulation of the services of the United States (CIA) by corporate interests to influence affairs in Namibia for their sole corporate benefit is a fact – these days extensively practised western world wide.
"The point is to what extent does the SWAPO leadership REALLY understand what is going on in this economic colonisation context?? State governance of its faculties and assets is corroding in incremental steps with a constant increase in total debt all merging towards an exchange of hard assets in a settlement."[8]