This is a shortened import from the Wikipedia article as it appeared 21 January 2021.

A sniper is a military or police force marksman who engages targets from positions of concealment or at distances exceeding the target's detection capabilities. Snipers generally have specialized training and are equipped with high-precision rifles and high-magnification optics, and often also serve as scouts/observers feeding tactical information back to their units or command headquarters.

In addition to long-range and high-grade marksmanship, military snipers are trained in a variety of special operation techniques: 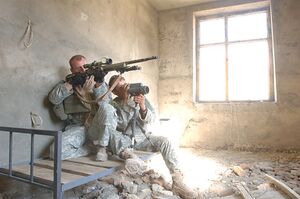 A typical sniper tactic for concealing the own position within a building, by hiding in the depth of the room

Generally, a sniper's primary function in modern warfare is to provide detailed surveillance from a concealed position and, if necessary, to reduce the enemy's combat ability by neutralizing high-value targets (especially officers and other key personnel) and in the process pinning down and demoralizing the enemy. Typical sniper missions include managing intelligence information they gather during reconnaissance, target acquisition and impact feedback for air strikes and artillery, assisting employed combat force with accurate fire support and counter-sniper tactics, killing enemy commanders, selecting targets of opportunity, and even destruction of military equipment, which tend to require use of anti-materiel rifles in the larger calibers such as the .50 BMG.

A police sharpshooter is part of a police operation and usually takes part in relatively short missions. Police forces typically deploy such sharpshooters in hostage scenarios. In the US, as part of a SWAT team, police snipers are deployed alongside negotiators and an assault team trained for close quarters combat. Police snipers typically operate at much shorter ranges than military snipers, generally under 100 meters (109 yd) and sometimes even less than 50 meters (55 yd). Both types of snipers do make difficult shots under pressure, and often perform one-shot kills. Police snipers placed in vantage points, such as high buildings, can provide security for events.

The need for specialized training for police sharpshooters was made apparent in 1972 during the Munich massacre when the German police could not deploy specialized personnel or equipment during the standoff at the airport in the closing phase of the crisis, and consequently all of the Israeli hostages were killed. While the German army did have snipers in 1972, the use of army snipers in the scenario was impossible due to the German constitution's explicit prohibition of the use of the military in domestic matters. This lack of trained snipers who could be used in civilian roles was later addressed with the founding of the specialized police counter-terrorist unit GSG 9.

The longest confirmed sniper kill in combat was achieved by an undisclosed member of the Canadian Joint Task Force 2 special forces in June 2017 at a distance of 3,540 m / 2,2 miles. The previous record holder was a member of the Blues and Royals of the British Army. In November 2009, he struck two Taliban machine gunners consecutively in Helmand Province in Afghanistan at a range of 2,475 m / 1.54 miles.

This page imported content from Wikipedia on 21 January 2021.
Wikipedia is not affiliated with Wikispooks.   Original page source here